Will the new chop block rule affect the Broncos?

There has been a lot of talk about the new chop block ban. Will it affect the Broncos' zone running game?

Share All sharing options for: Will the new chop block rule affect the Broncos?

So we've all heard about the rule changes by now, (and if you haven't, go watch Brandon Perna's awesome video about it) and the one that should interest Bronco fans in particular is the rule banning all chop blocks.

Now, before we dig into the implications of this rule, let's establish what we're talking about here. A chop block is when a defender is engaged with a blocker, and a second blocker hits him below the waist. These used to be illegal on all pass plays, but legal on some running plays. They are now illegal on ALL plays.

A cut block, on the other hand, is when a blocker goes below the waist in a one-on-one situation. These are still legal on running and passing plays. This is good news for the Denver Broncos since the cut block is a part of their zone blocking scheme.

Let's take a look at a couple clips to illustrate.

Here is an example of a cut block executed as part of a stretch zone run in the Super Bowl. 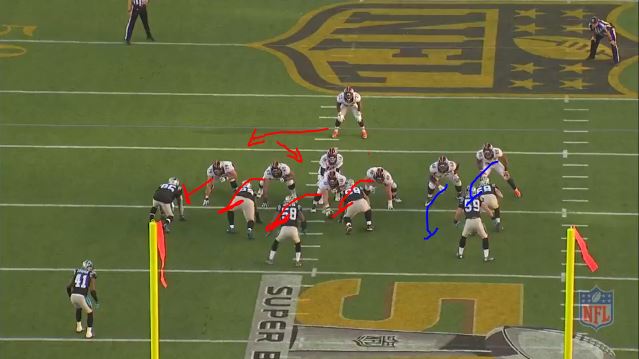 This is a stretch zone to the offense's right, so all the linemen are going to flow that direction. The two backside blockers (highlighted in blue) are going to cut block their defenders (not very successfully, however, but that's a different post). 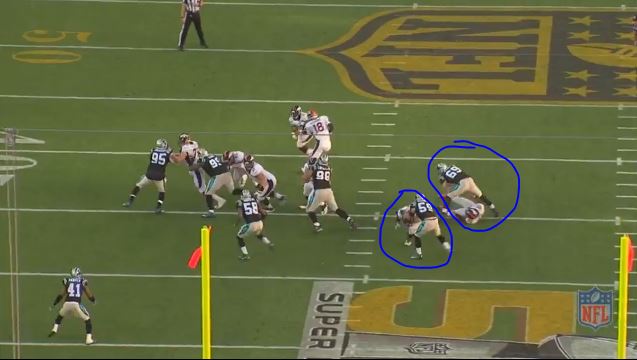 Here is a shot as Virgil Green and Ryan Harris are cutting their defenders.

Now, let's take a look at one of those illegal chop blocks executed by our favorite blocker of yesteryear, Julius Thomas.

Not only did this play negate a 77 yard TD to Demaryius Thomas, but it also injured Campbell. The problem is, Campbell was coming after Ryan Clady and engaging with him when Julius blocked him. If Thomas had done this during a one-on-one blocking situation it would have been a legal cut block, but since Ryan Clady engages with Campbell, it becomes illegal. This is why Clady jumped away from Campbell like he had the plague when he saw Julius going low. But he was too late.

Now that play was on a pass, so it was already illegal, but it gives you an idea of the distinction between cut blocks and chop blocks.

So back to the question at hand. Will this new rule change affect Denver's running game. The answer is a solid "maybe". In theory this shouldn't affect Denver's zone running attack as they can still legally employ their cut block techniques like we saw in the running play above. However, in reality, things might get a little messy depending on how strictly the rule is enforced.

Eliminating chop blocks is still significant. Not being able to cut a guy on combo blocks is a huge deal, DL can hold the releasing blocker.

The best way to get a DT to not hold us on double teams, is a chop block. Now there's nothing to stop them. Fun times.

100%.. Hard to avoid that 3 tech when he is grabbing and trying to prevent his LB from getting blocked. https://t.co/v8xQ3jz24k

Here is a clip illustrating this. Along with what was previously a legal chop block to counter.

Tricks of the trade for DL vs the run especially vs Combo blocks. Holding the OL, preventing him from releasing. pic.twitter.com/PSSXTtjleQ

In the clip above, the center Travis Frederick is trying to get to the second level to block the linebacker, which is his responsibility on the play, when he is held by the defensive tackle. Right guard Zach Martin (one of the best in the business) has responsibility for the DT who is currently holding Frederick, so he cut blocks him, but since he is engaged with Frederick it is technically a chop block.

This is one of John Harbaugh's big problems with the rule (remember, they ran Kubiak's system in Baltimore last year with Kubes as the OC). Here are some excerpts from his interview with Pro Football Talk on the subject.

"Defensive linemen don’t want it because they don’t want to have to worry about the cut block," Harbaugh said. "They want to hold onto that center and pull themselves through, so two guys are free runners to go hit the back. That cut block on the back side protects the running back from getting smashed in the side of the head from backside pursuit. And it does not put the defensive linemen in any kind of danger, unless it is done as a post and a cut – which if you told that one team, ‘That’s out, you’re going to get called for that. Don’t do it anymore.’ – we wouldn’t have this conversation."

Harbaugh's argument is that instead of changing the rule entirely, they should have just cracked down on dirty hits to the knees that were apparently only being done by one team.

Harbaugh said the coaches were shown video of some of the blocks that were legal last year but will be illegal this year. In Harbaugh’s position, the rule could have been written in a way that would have banned dangerous hits to the knee without eliminating all chop blocks.

"Based on a few of the clips that they put in there by one team, that posting and cutting people’s knee, that could be cleaned up real simply by getting that team to stop doing that technique," Harbaugh said.

To be clear, Denver is NOT the team to which Harbaugh is referring, and film of our center, Matt Paradis, was actually shown at the league meetings as an example of how to block correctly in the system. However, the controversy around this rule is likely why the Broncos were one of the four teams to vote against the rule at the league meetings (judging from the comments above, I have to believe Baltimore was one of the four as well).

When asked about the rule change, Gary Kubiak stated that he was "concerned" and that it "definitely changes some of your teachings of your technique".

Will this have a huge effect on our running game? I don't think it will be a big effect, but it will have some. It could lead to an increase in penalties by our O-linemen, and could also lead to defenders holding our linemen more. I'm sure that's something Kubiak and his staff will keep an eye on and turn in tape to the league office if they see it happening.