Wide receivers and the hall of fame

Share All sharing options for: Wide receivers and the hall of fame

The NFL is a passing league and is gradually becoming more so. 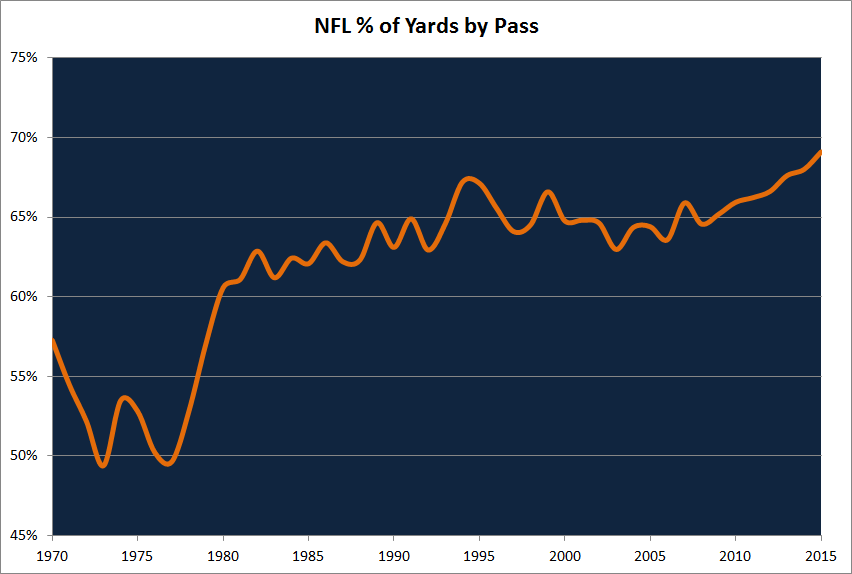 This makes the QB and his receivers very important (along with the offensive line). It also makes pass rushers more prominent from the defensive side.

There are currently 14 players in the NFL Hall of Fame who are listed as having played WR (note that some of the older players are listed as offensive end or split end - I’m not going to discuss them). The curious thing is that the criteria for WR’s and HoF selection has changed as the league has become more and more pass-wacky. Players like Lynn Swann, given their career stats, would have absolutely no chance at the HoF if they played NOW because passing is so much more prevalent than when they played. Swann played from 1974 to 1982 and finished his career with only 336 catches and 51 TDs. That means he averaged 37 catches per year and 5.6 receiving TDs. The NFL writers agreed that those numbers qualified him for the HoF. Keep those numbers in mind when looking at the chart below and asking yourself this question: Which WRs who are currently active or recently retired will make the HoF?

The stats for the 14 "modern era" WRs in the HoF

It’s interesting to note that we have a broad range if you look at receptions per TD. Art Monk had a whole lot of catches for his era, but that meant he ended his career with only one TD for every 13.8 catches. Conversely, Paul Warfield only averaged 31 catches per year, caught one TD for every 5.0 passes. No elite receiver will ever come close to that 5 catches per TD for their career because elite receivers catch about three to four times as many passes per year as Paul Warfield did.

So let’s look at the current or recent WRs who might have a shot at the HoF and evaluate a few of them - five who are current (Demaryius Thomas) or former (Rod Smith, Eric Decker, Brandon Marshall and Wes Welker) Broncos. 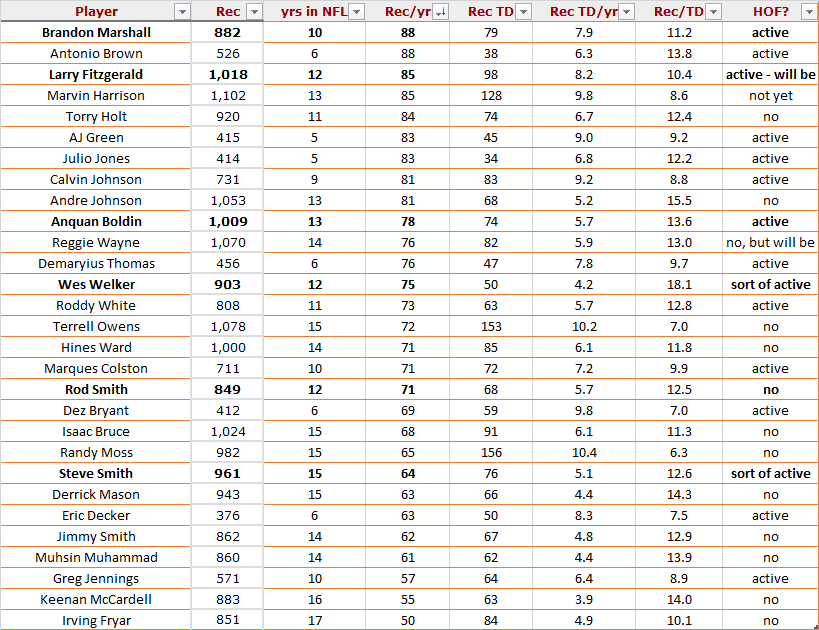 WRs who have played recently and caught many passes

The column on the far left shows my personal opinion in some of the cases about whether or not a player has a shot at the HoF.

There’s no way in hell he gets into the Hall of Fame. Why? Because he wasn’t an elite NFL receiver for long enough and he caught too few TD passes. Keep in mind that Chris Carter, Steve Largent and Tim Brown got into the HoF largely based upon their red zone prowess. All three of those guys finished their careers with double or more the TD catches that Welker has.

While Rod was an elite WR for the majority of his career, he was never considered the best WR in the league and suffers similar dearth of TD catches like Welker. While I would love to get another Bronco from the back-to-back champs in the hall, Terrel Davis deserves it much more than Rod. Rod Smith has no chance of ever getting into the HoF.

I never thought I would be writing about his potential HoF candidacy, but he has an outside chance if he continues to have a really low receptions per TD rate. He has only been in the league for six years. He has to play for at least another six with similar stats to come anywhere close to HoF consideration, but he has a slim chance. I’d say 2% chance mainly because of the team for which he currently plays. Their offense is not conducive to WRs putting up big numbers.

Believe it or not, the "other" Brandon Marshall has been in the league for 10 years now. During that time he has been one of the most prolific pass catches in the game. He is currently 22nd all-time in catches and 8th in terms of players who are active (Welker and Steve Smith are still technically active although the odds of either playing ever again in the NFL are slim). If Brandon Marshall can keep even close to his current pace in terms of receptions (88/yr) and TDs (7.9/yr) for another 4 years, he will have a good argument for the HoF. Let’s say he gets another 320 catches in the rest of his career and another 21 TDs for the sake of argument. That would mean he finishes his career with 1202 catches and 100 TDs. He caught 109 passes and 14 TDs (a career high) last season. Right now, the #3 receiver all-time, Marvin Harrison, has 1102 catches, meaning that Marshall would end his career as the #3 all-time receiver in NFL history (no one else is up there who is currently active). Those stats should be enough to get him in the HoF, but what if he his production falls off much more quickly. Let’s say he finished his career with 1100 catches and only 90 TDs. Those numbers may not be enough for the HoF because of the production of some of the other WRs who will have been in the league for 10 years at that point (AJ Green, Julio Jones, Dez Bryant and Demaryius Thomas). All of those guys could theoretically be putting up much better numbers than Brandon Marshall which will make it a harder sell for his case to be included in the HoF.

Despite his drop rate DT has a chance to make the HoF if he can continue producing stats at the same rate that he currently is. Despite playing with Tim Tebow as his QB for one+ year, he is still averaging 76 catches/yr and 7.8 TDs/yr. His current rate put him in the conversation with the players who are considered the best WRs in the league: Calvin Johnson(now retired*), Larry Fitzgerald, Antonio Brown, AJ Green and Julio Jones. For DT, I believe that it will come down to continued production. If you look at what guys like Megatron and Fitz have been able to do even after 6 or more years in the league, i.e. 100 catches and 10 TDs, that is what DT will need to be able to maintain for another five or six years to get his name in the conversation for HoF. Honestly, he needs to do what Brandon Marshall has been able to do during years seven through ten of his career.