When you think about it, it isn't hard to become a Broncos fan when you grow up in Denver; but every fan has that defining moment when they know that's "their team" and will forever be "their team."

I remember trying to watch football with my dad and uncle when I was young and quickly lost interest. I was too young to care, and preferred to be outside with my friends. Due to being an Army brat, my dad was a Cowboys fan first, and became a Broncos fan after spending his childhood and teenage years in the Denver area after his dad retired from the Army. Dad's influence had a big part in my life, and I did my best to be a Cowboys fan like him, but it wouldn't stick. Pictures from my childhood are filled with me wearing Broncos gear, even though I knew nothing of the game. I just knew that was the team I liked.

Then, in 1996, it happened. I started following football. I was 10 and began showing a genuine interest in sports. I watched entire games with my dad, constantly asking questions about the game,

"What's the difference between a tailback and a fullback?"

I know, that last question seems sacrilegious for a Broncos fan, especially one who grew up in the 90s, but I didn't know, and was trying to learn everything I could about the game. If I was playing backyard football with my friends and someone did something I didn't think was allowed in the game, I would run into our apartment, ask my dad, and come out with a little more football knowledge. I still wasn't a full-on Broncos fan, but I was getting there.

On January 25, 1998, just 22 days before my 12th birthday, was the defining moment I became a Broncos fan. Every Broncos fan knows what happened that day. The Broncos beat a team they weren't expected to beat, and finally hoisted the Lombardi trophy. But it wasn't the victory that sealed the deal for me. It wasn't Terrell Davis running down the Packers defense after taking a break in the second quarter, or the underrated defense that threw everything they could at the three-time NFL MVP.

It was seeing a 37 year-old man turn a busted play into a first-and-goal by literally throwing himself headfirst and getting spun like a top mid-air. 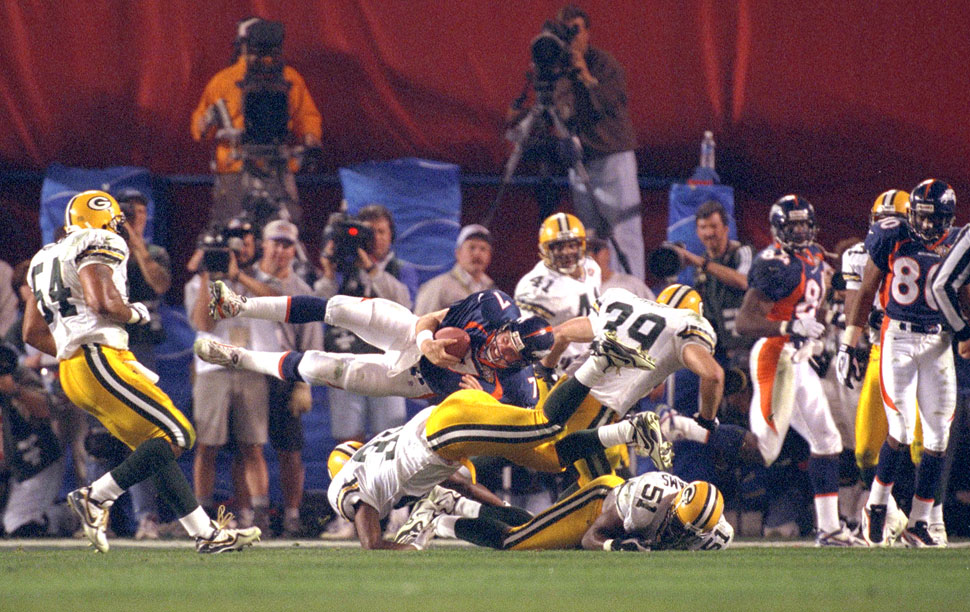 That was it. That was the defining moment that made me a Denver Broncos fan for the rest of my life; and to this day, I still get goosebumps whenever I see that play.

I've seen some cool things happen since that game. Terrell breaking 1,000 & 2,000 yards the following season, a second Super Bowl title, a new stadium, Jake Plummer saving the season in 2003 by hitting Ashley Lelie in overtime against the Browns to set up a game-winning field goal, Champ Bailey intercepting Tom Brady and running it back 99 yards, an unlikely playoff team in 2011, Von Miller, Peyton Manning, "This one's for Pat."

None of them come close to the magic of John Elway's helicopter play.

That play sealed the deal for me, and even though I own many Broncos jerseys of different colors, the first and only John Elway jersey I will ever wear is blue; and it all comes back to that play.