A district judge threw out the Kaiser case on Tuesday January 11th removing the final obstacle for the sale of the team. Ian R is reporting that a sale will be announced as soon as the new coach is hired meaning there is a strong possibility the new ownership is also getting a say in this. Paton will probably keep the new ownership informed.

It makes sense on multiple fronts that the new ownership will not want to waste any time and will get a coach of their liking and would want that coach to be involved in the drafting process along with George Paton. 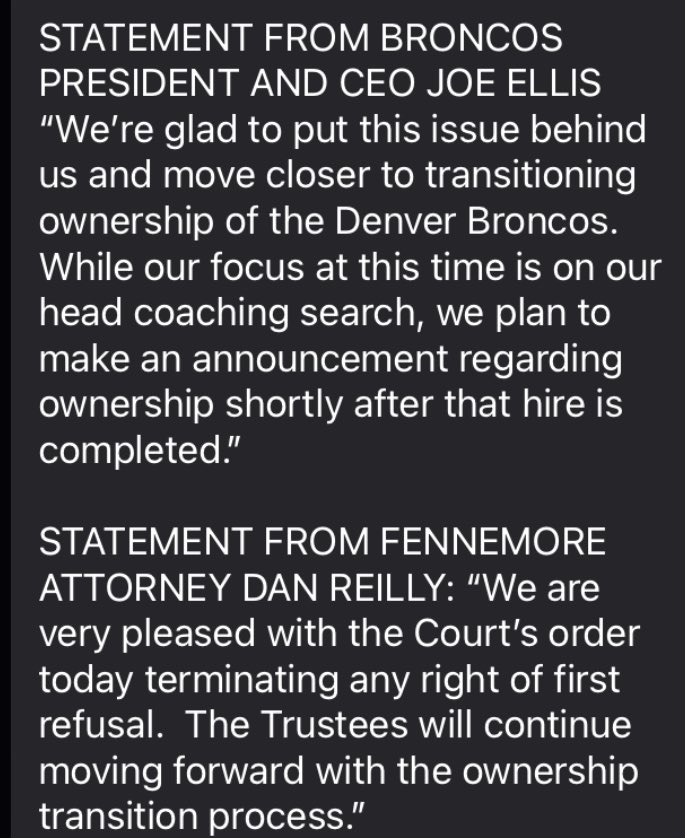 Woody paige is reporting that Peyton and Elway are in different groups. As is well known by this time neither has the net worth to directly buy the Broncos however they are allied with other investors who have the money but lack the know how and credibility that these former QBs bring to the table.

There are also other clues from Paton's head coach committee.

Noticeably absent from the committee is team executive Brittany Bowlen, who had been groomed in recent years to succeed her late father and former Broncos owner Pat Bowlen as the team’s controlling owner.

Brittany Bowlen’s absence is the strongest indicator yet the team will be sold. Ellis stated Tuesday an announcement on the Broncos’ ownership transfer would be made shortly after the team’s new head coach is hired, which figures to be in about two weeks.

There are two meetings on the calendar for NFL owners and they are March 27th and May 23rd. League rules also allow for convening a special meeting for owners to vote on this. It is not hard to imagine that a group led by either Peyton or Elway would have already reached out to the other team owners. Also the NFL wants to solve this mess soon. It is in the best interest of the new owner/President to get involved in the offseason as soon as possible. If we get a new coach in February, there is a strong possibility we are getting a new owner by the time of the first league meeting on March 23rd or even earlier via special league meeting.