Upon Further Review: No Challenge by Fox

This ended up to be a pivotal decision in the overall outcome of the game.

Share All sharing options for: Upon Further Review: No Challenge by Fox

This is interesting, but IMO Decker took two steps. Was a catch before he even hit the ground. RT @cieslak87: pic.twitter.com/A4DpRxM7UJ

Last night there was a pretty widespread reaction on twitter over Fox's failure to challenge what should have been a TD by Eric Decker.

Though later on in the game Fox had no control over challenging the Hillman fumble, he had leeway to take a second look here.

Someone tweeted at Mile High Report what has now become known as the "Calvin Johnson Rule". Whereby a receiver has to control the ball through the ground in order for the play to be considered a catch. That rule does not apply here, and this is why: 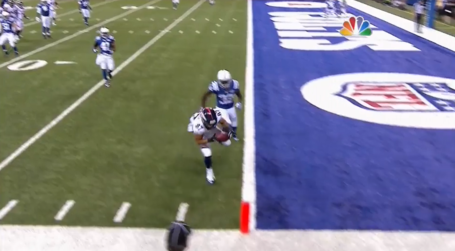 Here Decker has his right foot in the ground and is now starting to reach the football out. 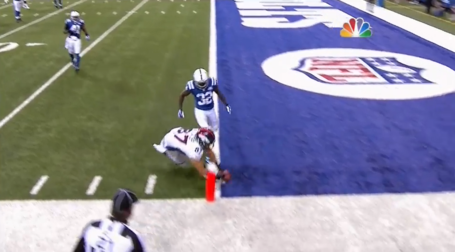 At this point his left foot has hit the ground. Decker is reaching but contact with the pylon has not been made. 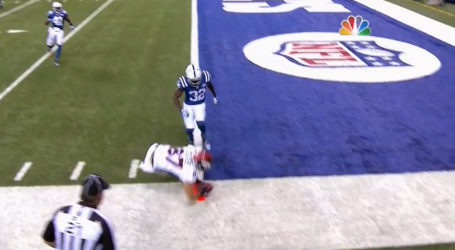 Contact has been made with the pylon, and the play should be over. Anything after this is inconsequential. The Calvin Johnson rule is null and void as soon as Decker makes contact with the pylon because he's already established possession and control. The catch was made in the field of play and the final act was to stretch the ball out to make contact.

In fact here's the scoring rule from NFL.com:

Section 2, Article 1 Touchdown Plays. A touchdown is scored when:

(c) A ball in the player possession touches the pylon, provided that, after contact by an opponent, no part of the player's body, except his hands or feet, touch the ground before the ball touched the pylon...

It was a boom boom play in real time so I do not fault the official for making the call he did. I do however fault a coach for not challenging it when the same coach challenged an iffy spot in the 1st quarter of the game last week.

The score here was 33-14 Indianapolis. Later on this play loomed large as the Broncos could have had the ball near midfield down 39-34 as opposed to down 39-30. Four points in a game where the offense had a hard time finding a rhythm was huge.

If Fox was trying to protect a timeout, shame on him. If the folks upstairs misunderstood the rules and advised him poorly, shame on them. Bottom line, the Broncos needed this touchdown and it was a mistake not to challenge. had they done so, Decker would have had 6.

What are your thoughts Broncos Country?