Hello folks, here to bring you some analysis in stead of tomorrow's matchup against the Dallas Cowboys. If you are unfamiliar with the Cowboys, this should fill a lot of holes on what to look for.

Share All sharing options for: Scouting the Dallas Cowboys Offense

A bit of a weakness for them has been on 3rd down where the Cowboys are converting just 34.8% of their opportunities (16/46).

Tony Romo is having a fine year having completed 72.4% of his passes for 8 TD's and 1 INT thus far. He has struggled the most passing the ball to the left side of the field completing 18 of 35 attempts for 176 yards and 1TD/1INT.  His most efficient area of the field has been passing the ball to the short middle (within 10 yards of the LOS).  In this area Tony is 45-48 for 332 yards, and a touchdown.  Taking it further down the middle beyond 10 yards, Tony is 12/19 for 195 yards with 4 TD's.  Checkdowns and Jason Witten are mostly to thank for this success.

2013 3rd round pick Terrance Williams will likely be the #2 receiver with Miles Austin looking doubtful with a hamstring injury.  He was targeted 8 times last game with 7 receptions for 71 yards.  He also fumbled.  Most of his targets have come from the short portion of the passing game where he's been targeted 9 times with 7 receptions for 51 yards and an Interception.

Outside of opening day when Jason Witten caught a pair of scores, he's been relatively quiet.  The last three games he's seen 24 targets for 11 receptions, 122 yards, and no scores.  He will test the Broncos down the middle.  Most of his damage has come within 10 yards of the line of scrimmage (11 catches for 101 yards and a TD), but he's also been targeted deep 4 times.  Most of his looks will come from the middle or from the left side of the offensive formation.

DeMarco Murray gets the lions' share of the Cowboys snaps at tailback.  Thus far he has rushed for 356 yards on 72 carries (4.9 average per attempt).  He's also elusive and strong having forced a total of 12 missed tackles through the first 4 games.  Murray has fumbled once.

In the passing game, Doug Free, Tyron Smith, and Bryan Waters have graded out well.  Frederick, Leary, and Bernadeau have not. Frederick and Free have given up 2 sacks each.  All total, in 174 pass blocking snaps, the Cowboys line have given up 39 pressures (22.4%). 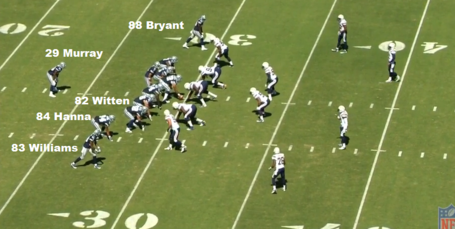 Expect to see a lot of 2-TE formations on early downs.  Both Cowboys TE's block well and with playaction you have the possibility for some misdirection and shots downfield.  #84 James Hanna and #82 Jason Witten are your TE's here.  #83 Terrance Williams and #88 Dez Bryant are your wideouts.  Expect Williams and #17 Dwayne Harris to split some snaps opposite of Dez Bryant.   If Austin is a go, he will be in opposite of Dez.

The Cowboys currently do not list a FB on their active roster, so if there are to be some "two back" looks, they will probably use the extra TE as an "H" back.  I wouldn't expect any 4-wide looks with the Injury to Miles Austin. 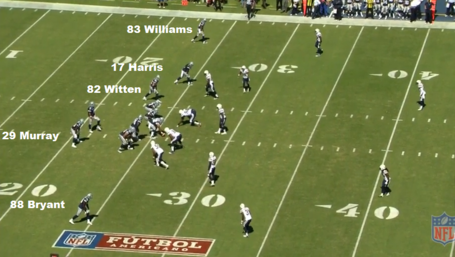 If the Broncos can put the Cowboy offense into 3rd and long situations, they will see more 11 personnel with the receivers being Dez, Harris, and Williams.  Witten is used very much like a slot receiver and should garner some double coverage with a LB/S bracket.  If this is the case, the duo will almost always be Duke Ihenacho and Danny Trevathan.

I expect the Broncos to roll Rahim Moore over to DRC if necessary to help give him some deep protection for Dez Bryant.

On to the Defense!!!  Go Broncos