No making fun of my squiggly lines.

Test how precise your football knowledge is by playing the Precision Play of The Week for a chance to win Super Bowl tickets – brought to you by Gillette Fusion ProGlide, precision comfort, even on sensitive skin.

If you're looking for precision, look no further than the three touchdown passes Peyton Manning threw to Demaryius Thomas Sunday. Each one was a clinic on professional quarterback and wide receiver play. Each one was unique in the way it defeated the Chargers defense. Each one built upon the last.

The First Touchdown - Out route to acrobatic glory

There are two defenders between Demaryius Thomas and the end zone when Peyton Manning releases the football, but a crucial downfield block by Montee Ball and an acrobatic-as-hell move by Demaryius Thomas neutralize the Chargers defenders. Thomas is able to hit the corner of the end zone by twisting and contorting his limbs in a fashion I was tempted to recreate at home, but I don't think my medical insurance covers "insane football fan delusion."

The contortion is pictured, of course, at the top of this post. 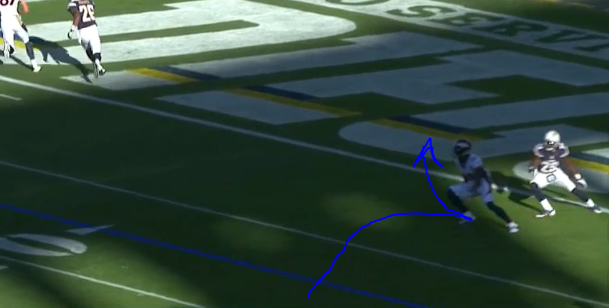 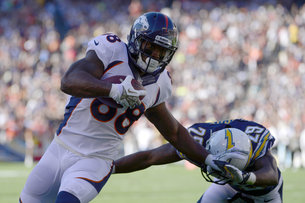 For all the talk about how Mike McCoy would have an edge against the Broncos offense, having coordinated it over the four previous seasons, you would think he would be prepared for this play to come. The brilliant part about this out-and-in to Demaryius Thomas is that it was completely set up by the touchdown before it. The distance to goal, as well as the formation, are nearly identical. As the New York Times Fifth Down blog notes -

The second touchdown was an example of what’s called "building offense," which is when plays derive from earlier plays. It’s something the Broncos do better than any team. In this instance, the field position and receiver alignment were similar to Thomas’s first score. Thomas again ran an out-route. This time, cornerback Shareece Wright, knowing Denver’s tendencies, sat on it.

Peyton Manning, expecting that Wright would play the tendency, called a route that had Thomas make the out-cut but then immediately redirect back inside. It was an easy touchdown.

There's an all-out blitz coming, but Manning sees it, and calls the perfect counter: a screen to DT. With Chargers defenders quickly in his face, Manning has to step back and contort his arm a bit to make sure those defenders don't bat down his pass. He does so, and it's daylight for DT.

By the time Demaryius Thomas catches Peyton Manning's pass, five Chargers defenders are completely out of the picture (not literally, but figuratively - those "out of the picture" are circled in red, in the picture, above). Two other defenders are just beyond the line of scrimmage and are likely out as well. That leaves four Chargers downfield to stop Demaryius - with five Broncos blockers, circled in blue, leading the way.

This play was set up by the Broncos' success in the passing game as a whole. The Chargers keyed up more blitzes in the second half in response to Denver's success in the air, so Manning responded with a well-timed, perfectly executed screen.

The out route set up the out-and-in. The two previous touchdowns set up the need to blitz, and the Broncos' ability to execute a screen. Demaryius Thomas' three touchdowns Sunday built upon one another like the stones of a pyramid, with this beautifully executed screen the capstone.

Which DT TD was your favorite?

Which Demaryius Thomas touchdown was most impressive?