I plan on getting into more specific schematics tomorrow. Future breakdowns will include some of their blitz schemes as well as some specific strategy the Broncos could use in order to neutralize the pass rush and defeat press man coverage. This breakdown will give you the low-down and basics on the Kansas City Chiefs defense.

The first thing that sticks out on take when the Chiefs are in their base 3-4 defense is just how wide the OLB (Hali and Houston) line up. They are almost always in a wide 9 technique or even further out from the interior. 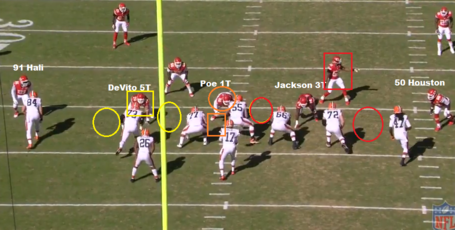 The wide alignment helps with a couple of things. In coverage, you will see these guys drop into a shallow zone to protect the flat. Lining up here puts them closer to their assignment. When rushing the passer, they have the speed to make up that ground which puts pressure on the tackles to kick outside wide enough to pick them up. It helps them set up double moves and get folks off balance when they want to cut back inside.

This is a pretty standard set up for their line. Sometimes Poe will line up nose on the Center, but more often than not I see him shaded to one side or the other as 1 tech. DeVito OR Jackson can play the 5T depending on the defensive shift. Whoever that 5T is will two-gap and try to protect the B and C gap to their side of the LOS. Take a look at Derrick Johnson for a minute (red). This man is so fast at play recognition and he shoots to his assignment so quickly. On an alignment such as this, He could simultaneously be responsible for the A gap to the right and the C gap on the right (depending on whether or not Houston is going to rush or drop). He is capable of covering both.

The beauty of it for the Chiefs defense is that Poe has become such a disruptive defensive tackle that he can easily play either gap even when shaded. On this play once it is diagnosed a pass Poe starts to the A gap he is shaded on and then does a beautiful rip move back to the other A gap that leaves Browns C Mack beaten and off balance. He gets a hurry on this play.

Here is something fascinating about the Chiefs use of personnel. In sub packages Eric Berry plays more like a linebacker. I've seen it play after play where he will line up next to Derrick Johnson at the same depth. Sometimes he covers man to man like that cover LB would do (Danny Trevathan), sometimes he drops into a zone and eyes the field in front of him. Whether or not you want to call this nickel or dime is irrelevant. This is the personnel they like to use in obvious passing situations.

The other DTs they like to use as a 3T opposite of Poe is either #97 Allen Bailey, #94 Jackson, #70 Mike DeVito. I saw Devito used in this defense when offenses are coming out of their endzone. 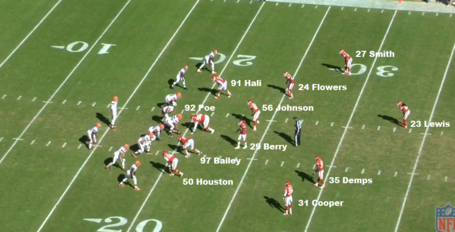 Really falls mostly to their three man line. According to Pro Football Focus, Poe Devito, and Jackson have combined to score +33.0 in run defense. Poe has the most stops with 23. They have combined for 56 tackles on the season. Surprisingly none of their linebackers grade out too highly against the run. Tamba Hali is actually graded out negatively. Usually rush ends/OLB have a tougher time in run support due to their aggressiveness, they tend to run themselves out of plays.