The next installment of an exclusive series and study on the Peyton Manning passing game. Here I'll take a look at the 2nd quarter against the Kansas City Chiefs.

I have attached a certain letter to a specific player. These will not change, regardless of where that receiver lines up. I do not care if Demaryius Thomas is lined up in the slot or as a split end.

Y = The TE (usually Julius Thomas) When there is more than one TE, every TE will be marked as "Y"

RB = whoever the back is

If there is a substitution (say Bubba Caldwell), he will be labeled according to the player he is replacing. Remember, I'm keeping it uniform so the information is simple to understand.

When you see these numbers under "alignment" it means if I were reading the offensive formation from LEFT TO RIGHT, there would be 1 receiver split to the left, and two receivers split to the right. Immediately after these numbers will be the specific alignment.

What about the TE? Unless the TE is split wide, he will not be labeled in the alignment. You would have to go back and reference my screen shots in order to know where he lined up on a given play.

White - Zone Coverage, whether it be with arrows or circles

I've decided to ditch the "concept" label as I don't feel comfortable enough diagnosing these things yet.  The biggest change this quarter was the Chiefs playing more Cover 2 with their safeties.  Still primarily man coverage underneath. 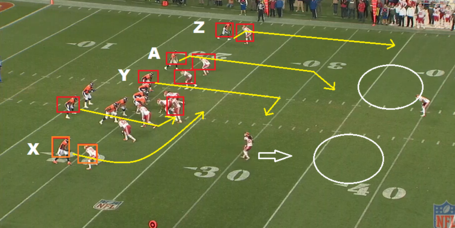 Easy read for Peyton.  The route combination on the left side of the formation, the deep safety on the left, and the retreating safety on the right means the middle of the field will be wide open.  Couple that with Derrick Johnson  most likely keyed on Moreno out of the backfield and all Demaryius Thomas has to do is get position.  He does and this play goes for 11. 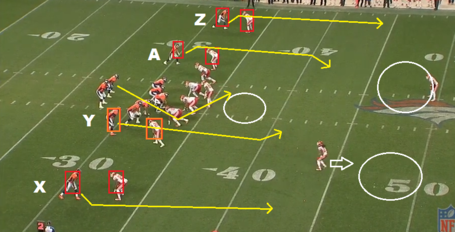 Sort of a mirror concept with goes on the outside and skinny posts to the inside.  Julius already has an edge presnap with inside leverage.  The ball comes out fast and Julius' big frame provides an easy target for a nice 20-yd gain downfield. 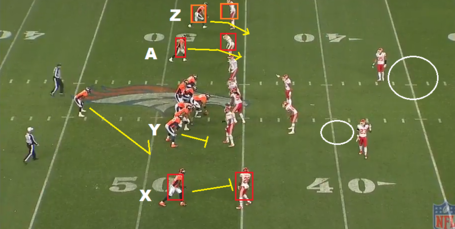 Really weird combination here.  We have double slants to the left side, but from what I can tell this is supposed to be a designed screen play to the back.  Demaryius on the bottom goes for the block as does Julius Thomas right from the snap.  Perhaps Peyton liked the lack of defenders to the left side of the formation, but it was an odd play to review. 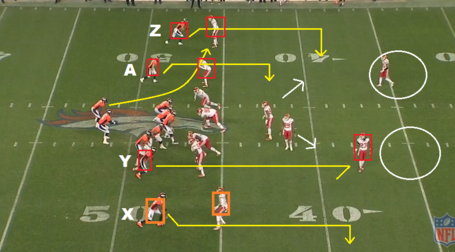 I really hate the outside release both Decker and Welker use on the square in routes.  It gives the defender position on the inside which is precisely where you do not want them to be.  They clear out the flat and Manning has Moreno wide open in the flat.  To the other side both Julius and Demaryius will be open.  DT's defender slips and falls.  This coupled with a well placed ball gives this play nice yardage after the catch. 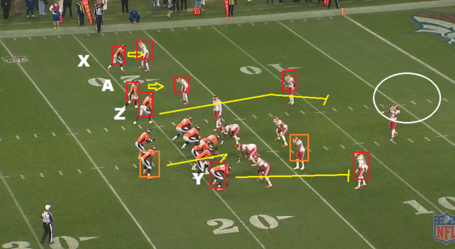 Designed screen play all the way.  Diagnosed and blown up well by Eric Berry. 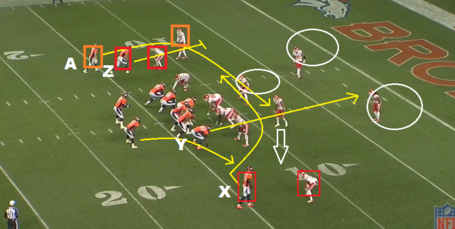 You know those designed pick plays that opposing teams fans always bitch about?  This is a beautiful example.  With Welker stacked behind Decker, Decker fires off and occupies his man.  It also effectively "picks" Welker's defender leaving him wide open over the middle.  On this play had Peyton waited just a second more (and he had time), Demaryius was left all alone on his crosser and it would have been a touchdown. 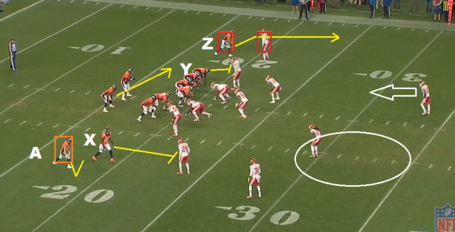 Here is a case of lack of execution killing a play.  We have another stack, this time with Welker behind Demaryius.  You can see just how far off Demaryius' defender is to protect against the deep ball.  Yes this is his defender.  Flowers who is aligned across from Thomas is actually on Welker.  All Demaryius has to do is get on that block and Welker has an easy 10 yards.  Bad position and bad hand placement kill this play. 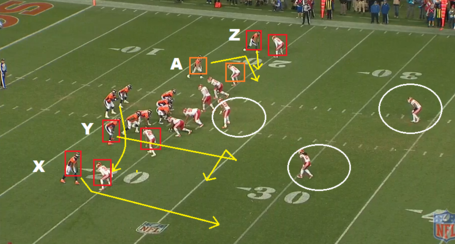 Remember those pick plays opposing teams fans always bitch about?  Well call this a designed pick play double cross.  Its a fugazi.  Decker is going to run a quick slant bringing his defender.  Welker starts off like he's going to criss cross to the outside as they would on this pick route combo, and Flowers bolts for the outside thinking he knows the story.  Welker instead runs a quick slant and turns the play into a 15 yd gain.  The Broncos knew that they'd know that we'd do what they thought and instead did something else--cappish? 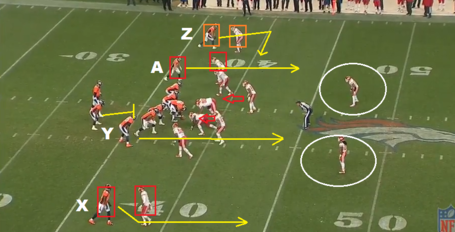 Decker releases to the outside as if he is going to run a "go" route.  His defender opens up his hips and keeps position on the deep ball.  Decker cuts it off short and into a square in.  Nice set-up and route by Decker. 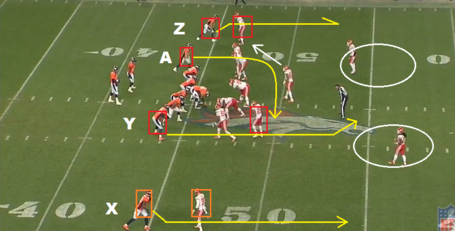 Demaryius beat Cooper on this route all game.  Releases outside, go route, 2 steps and good position on the playside safety playing cover 2, Manning overshoots him by a couple of yards. 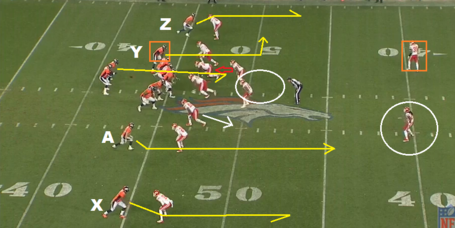 Very important here, JT has far off man coverage from the safety.  There is a blitz, but it does not matter.  Thomas runs a quick out and the ball is beautifully placed.  The safety gambles on the INT but misses and allows more YAC.  I've seen Chiefs fans and even Cris Collinsworth moan about how close this play was to a pick, but this simply isn't true:

And this is a fraction after he catches it.  Here Julius is in the process of bringing the ball to his body.  Had the throw been more outside it would have been a pick. 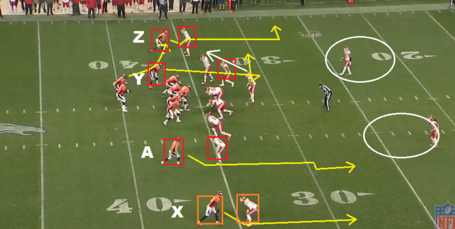 One thing has become very apparent to me from closely studying the passing game in the first half against the Chiefs. As long as the Broncos execute, they are hard to beat play in and play out consistently.  The Chiefs have a talented secondary, but they can only slow things down and keep things in check in limited spurts.  The Chiefs have not been a particularly tricky defense to read and diagnose.  For them just like the Broncos, it is more about execution than it is trickery or disguises.  Currently the Broncos offense holds the edge over this unit.

Next week (during Chiefs week Part II)  I'll finish up my analysis on this game.  Expect a breakdown of NE later on this evening and early tomorrow.