Nickel or Dime? Should be easy right? At the base level we know that a nickel defense will have five defensive backs and a dime defense will have 6 defensive backs. You can have any combination of corners or safeties that you want--in "big nickel" the 5th DB will be a safety giving you a 2x3 combination (2 CB x 3 S)....but what if the labels aren't what they're all cracked up to be?

I owe a lot of the inspiration behind this post to a fantastic conversation that several MHR members had in this "4-2-5 attacking defense post". Basically, Jeremy Bolander turned the knowledge I thought I had about defenses on it's head and gave me a new perspective on how to view things. I'm not going to represent that I understand everything Jeremy said--I don't. Jeremy's knowledge of the game and perspective is light years ahead of mine. It is like a rocket scientist trying to dumb down the intricacies of quantum physics for a lay person. But there are a few things that really spoke to me even at my level.

Let me post some of Jeremy's response and then key in on what grabbed my attention most:

don’t let the DBs fool you…

Diagnosing 4-2-5 isn’t about alignment of players, it is about personnel.

The reason personnel diagnosis is important can be summed up by Von Miller. Even when he is on the line, he is still a LB. Even when he rushes the passer 3 times in a row, he is still a LB. He is always a LB because he is always the same combination of strength, speed and responsibilities. Just because he is most effective rushing the passer doesn’t mean that the most effective defense won’t drop him into coverage. In a 4-2-5 the same reasoning applies to the Weak safety, the ends, etc. Two of the "DBs" in a 4-2-5 are glorified LBs (a base 4-2-5 looks a LOT like a 4-4) but with a major caveat: they are FAST. At its root a 4-2-5 is a fast and very strong defense.

Take away these things:

2) "Diagnosing 4-2-5 isn't about alignment of players, it is about personnel"

Again, I'm not completely sure what Jeremy means by Von Miller. I understand the comparison and the use of the example to highlight how some of the roles and responsibilities the DB's in a 4-2-5 can actually be closer to other position groups, but for now, I don't want to label Von Miller as a LB "no matter what."

When I see the Broncos line up in their standard 4-man front with two linebackers (what most of us have come to accept as our base nickel defense) Von miller is a rush end. Wolfe and Unrein are DT's lined up as 3-techs, and we usually see the LB combination of Woodyard and Trevathan (Trevathan especially against pass happy teams) with three corners and two safeties.

That to me is what our base nickel defense looks like.

Now I used all of this as a set up to get to the main point of this article. Given the flexibility we have on our defense with players being able to do a lot of different things and do them very well, I want to show you an example of how Jack Del Rio uses personnel tendencies to confuse and disguise his fronts. Again, keep in mind that traditional labels for defenses should be thrown out the window right now, and it's not about alignment, its about personnel and how they are used.

The play I'm using for this example is the forced fumble ran back for a TD by Tony Carter against SD. Remember on this play that Robert Ayers essentially batted the ball back to Carter--it signaled the beginning of our comeback. The situation is 3rd and 8. Chargers are set up in shotgun (max protect) with two receivers on the left side of the screen (off screen) and one on the right (off screen). 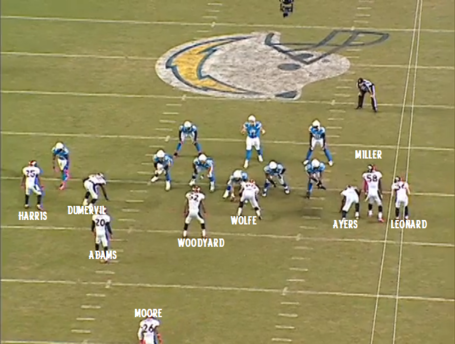 Here's a different view of the same play so you can see the other corners and receivers: 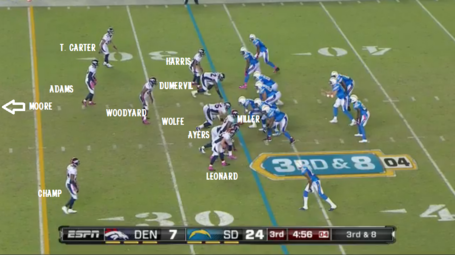 Now let's stop for a moment and take inventory on what we see or at least what we think we know. This is some variation of a dime defense with 6 DB's (three safeties three corners). In fact from how they line up, we can say visually there is a three man line with Dumervil and Ayers as ends and Wolfe as the 1 tech NT. Von Miller is lined up like a stand up LB, Woodyard in the middle as the only true LB, and both Carter and Champ are showing off coverage, potentially hinting a cover 3 shell where both of them and Rahim Moore will take a third of the field deep.

Adams is about 6 yards off the LOS in what looks to be a "robber" role (basically means he can crash the box on a run or read the QB in a pass, he's more of a FS at this point). Harris is showing press man coverage on the TE to his side.

Again, this looks like your standard Dime defense, but let's see what happens post snap, I'm going to break these into two categories "Front" and "Coverage" 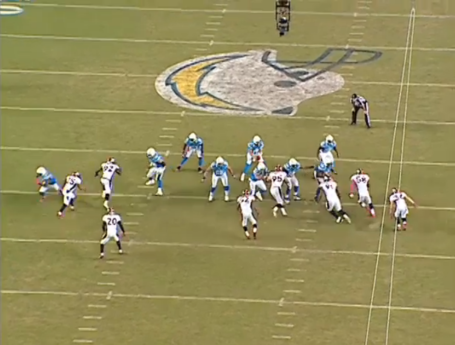 Initially what I see is a bit of deception. Ayers is actually going to run a stunt with Derek Wolfe, and this is important--remember how we initially labeled him as an End? Well Von Miller is actually the rush end and Ayers though he lines up as the end is more like a DT along with Wolfe. A disguised 4 man front if you will.

I also see that Chris Harris is a blitzer and not a cover man. In fact he essentially runs a stunt with Elvis Dumervil to the inside (Doom takes the LT outside, Harris comes inside) 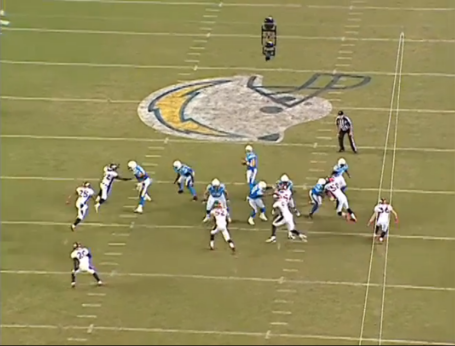 Late, we even see Woodyard run a delayed blitz on the RG. At this moment of time, Derek Wolfe's initial penetration has caught the attention of two blockers--the C and LG. Ayers should have good leverage on the C now that he is looping around in his stunt.

The SD line recovers and actually has good position on the stunt. With Woodyard and Harris blitzing, we essentially have 6 pass rushers against 7 blockers. The math means that we should have several different people with one on ones. The back realizes Leonard isn't blitzing and releases. More on that in a minute. 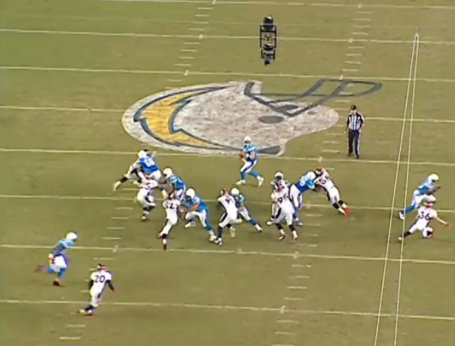 At this point, Von and Doom on the outside are the only ones that are winning their one on ones. You can see both Adams and Leonard taking on their coverage responsibilities and both are in great position. 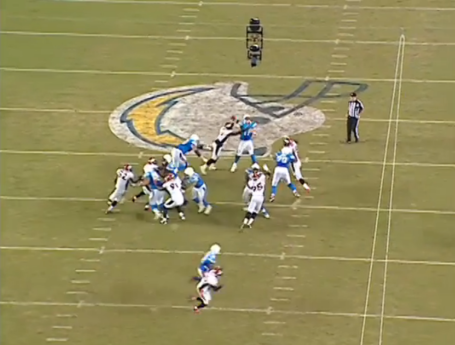 Let's move on to coverage for a moment then put it all together. 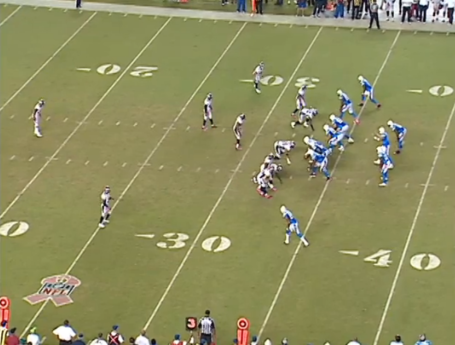 Champ is on the bottom, Tony Carter up top. To me looks like a Cover 3 "robber" concept with Mike Adams free to read the play. At the snap... 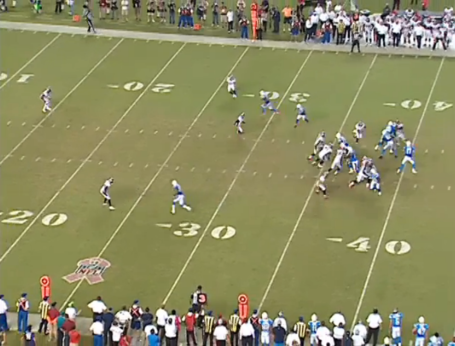 Starting to pan out that way except Mike Adams is more like a LB on this play--he isn't free to read and react because Chris Harris has released his man to blitz. Adams sole responsibility is to cover that short crossing route. Both corners and Rahim Moore confirm my presnap read. The Broncos are indeed playing Cover 3. 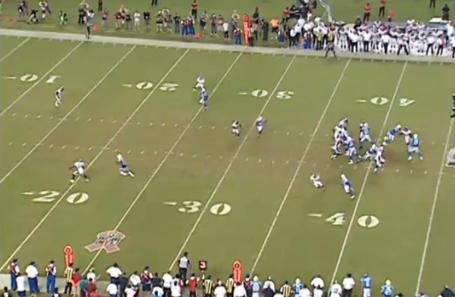 Both Champ and Carter open their hips to a trail position. Carter's man runs a deep square in and has great position. In fact this is likely who Rivers is targeting and if Doom doesn't make that play, it goes for a first down. Let me comment a bit on Rahim Moore. Given that there are only two receivers going deep, even if his responsibility is to play centerfield, this is the point in the play where he needs to recognize the play and break on that deep cross....he doesn't. This shows a lack of instinct to me.

Revisiting Leonard, his role on this play is also like a LB.

Here's what each player did on this play

Wolfe: ran an inside stunt attacking the "B" gap

Ayers: ran an outside stunt attacking the "A" gap

Miller: rushed from the RDE position (stand up)

Woodyard: blitzed the "A" gap

Adams: covered the short crosser (more like a LB)

Leonard: covered the check down (more like a LB)

The Broncos may have used dime personnel, but the players roles on this play signal to me either a disguised 4-2-5 or 5-2. Wesley Woodyard would be the monster if we were going to call it a 5-2 coming in on that delayed blitz. Had the Chargers run a draw he would have stuffed it.

Looking at the play this way we see two true LB's and three true cover man with the 4th cover man (Harris) running a corner blitz.

If you wanted to describe this play as our Dime defense playing a variation of a 3-3-5 defense with a corner blitz where two of the LB's (Von and Woodyard) also rushed the passer...that would fit.

If you wanted to describe this play as our Dime personnel disguising a 4-2-5 look with a double stunt and double blitz...that would fit.

If you wanted to describe this play as our Dime personnel disguising a 5-2 look with Wesley Woodyard as the monster...that would fit.

If you wanted to call this our Dime defense doing some whacky shit--that would fit as well.

To me this plays a lot like the 4-2-5 nickel especially with the double stunts to either side. But you see that doesn't matter. In fact none of the labels matter. Labels are there to help us make sense of things, but don't take them as gospel. Just because Von Miller is a LB doesn't mean he isn't also a rush end. Just because someone is marked a safety doesn't mean they can't play the role of a LB.

With our defense and the versatility we have both in the front 7 and on the back half in coverage, the role of any player can change on each play. This is what Jack Del Rio knows. And if you get caught up into the "right" labels, like some opposing offenses have, he will use what you think you know against you and turn those assumptions right on their heads.

How's that for some offseason X's and O's folks? Hope you enjoy, and I eagerly await whatever debates might spring up from this, let's talk football!