Remember back in OTA's when blogger Jon Heath caught the Broncos running a play from the pistol formation?

Share All sharing options for: Broncos ran "pistol" against Ravens in playoffs

It brought about a lot of debate and some excitement. Would the Broncos be utilizing it in 2013? Would it become a staple of their offense? Doing some film work the other day I stumbled upon them using it last season. Watching every offensive snap from the Broncos v. Ravens in the divisional round of the playoffs, Peyton and co. ran the formation a grand total of one time. Lets dive into the stills and diagnose the play shall we? 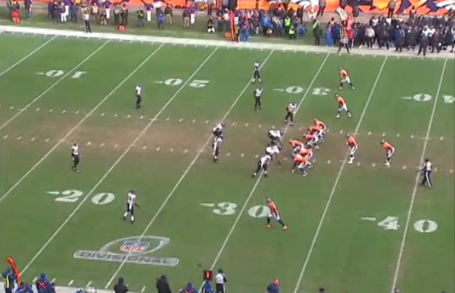 Broncos are sitting in 11 personnel with Decker and Stokley up top, Joel Dreessen off Orlando Franklin, and DT split at the bottom of the screen. Pay particular attention to the distance between where Koppen has the ball and where Manning is set up to take the snap. The ball itself is located on the 31 yard line, Manning is set to catch the ball at about the 35--stow that away for later. 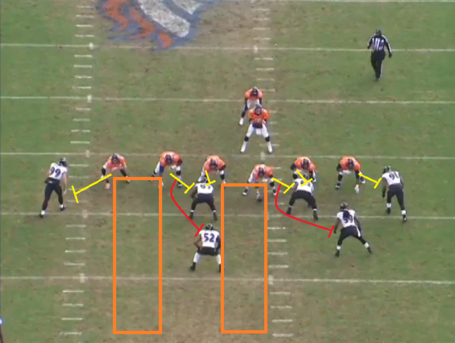 Here the Broncos are going to implement ZB on a designed cutback. Both Dreessen and Clady are charged with sealing off the ends. Koppen and Beadles are tandem blocking the 2-tech, Kuper and Franklin are tandem blocking the 3-tech. Hillman will have two reads here and it really depends on what that 3-tech will do. If he crashes down toward the "A" gap, Hillman will cut back to the "C" gap. The flow of the play will dictate that Koppen get to the 2nd level to block Ellerby and Franklin will get to the 2nd level to block Ray Lewis. 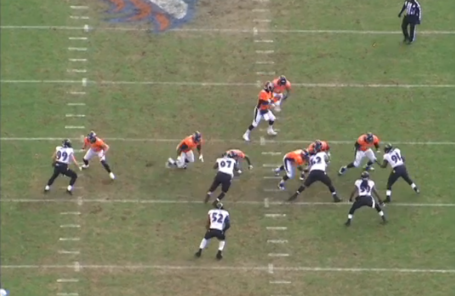 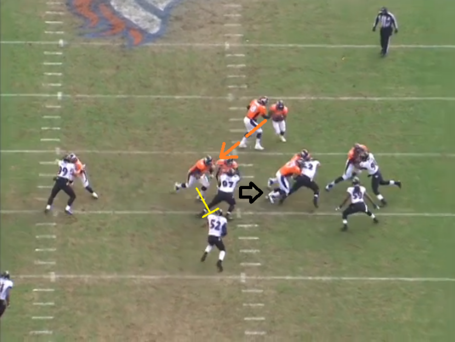 The 3-Tech has put himself into leverage on the inside and if you look at his feet, this is where he is heading. Hillman has read this and is prepared to bounce back toward the "C" gap and we have a fantastic hole forming. At this point Franklin HAS to let Kuper take the 3-tech and move on to the 2nd level. He doesn't. 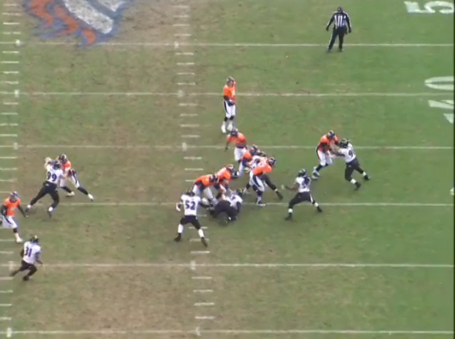 We can also see that Stokley on the backside is tracking the SS Pollard. Franklin's failure to get a block on Ray Lewis keeps this 3-yard gain from gaining 10 or more. On the 2nd level if Lewis is blocked, Hillman only has Pollard to beat and that is assuming Stokley will fail to get a block on him. 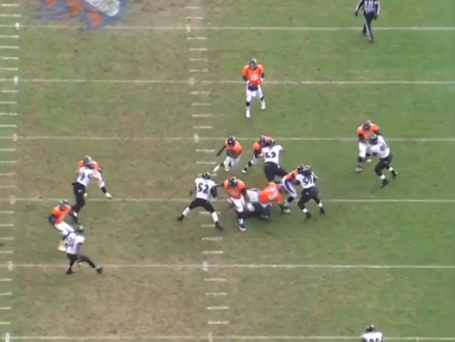 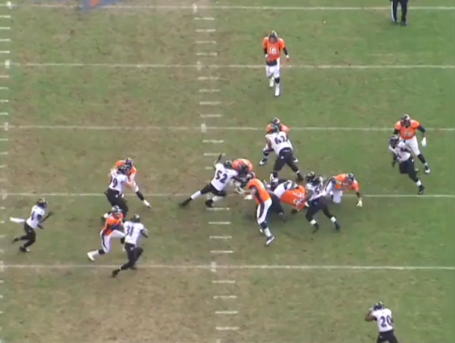 Like I said, they only ran this formation once that game--but to be sure the "pistol" has been in their playbook since last season.

When studying a bit further, this look is not all that different from Shotgun at least in Peyton's spacing from center. Remember at the beginning when we figured out there was 4 yards of space between the ball and where Manning would receive the snap? 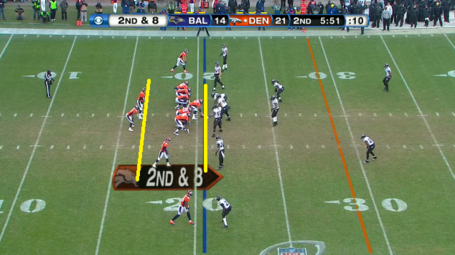 Here's a look at two "normal" shotgun plays and the spacing is about the same 4-yards it is in the pistol. This means the adjustment for the snap is non-existent. Both Peyton and his center go about their business as usual whether it be shotgun or pistol.

How much do I expect the Broncos to run the "pistol" in 2013? Not much at all. It is something they are capable of running and you might see a play here or there. Just don't be expecting to see Peyton running the "read option" from it--though I can guarantee the DE wouldn't be expecting Peyton to keep it....kind of like here:

Damn he's slow....made me flash back to the OJ Simpson chase in '94