Here's some of the interesting things I picked out during the 1st half of the Broncos latest preseason game.

Naw. The biggest question surrounding both Ronnie Hillman and Montee Ball all preseason has been picking up the blitz. I didn't see one pressure allowed by either in the first half, in fact lets take a look: 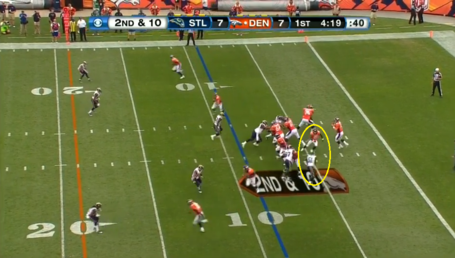 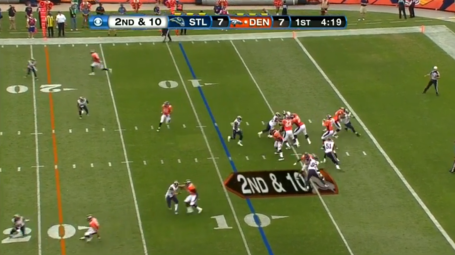 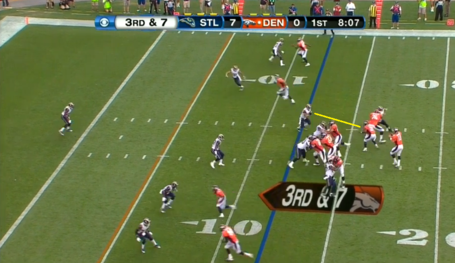 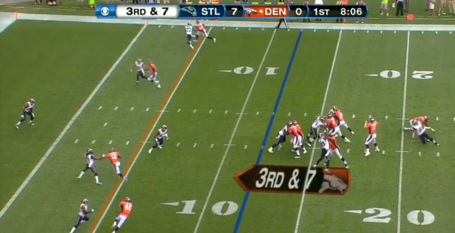 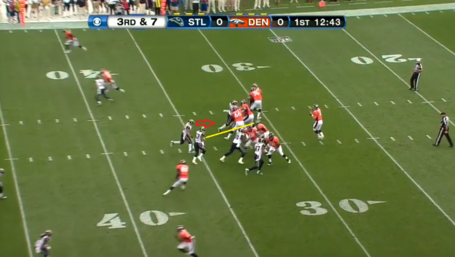 there's a double A gap blitz, Montee picks up the one coming right up the middle 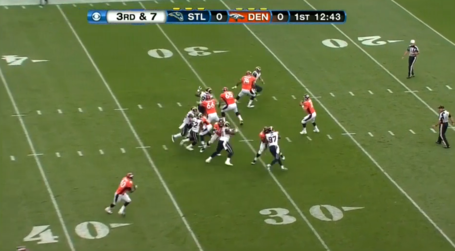 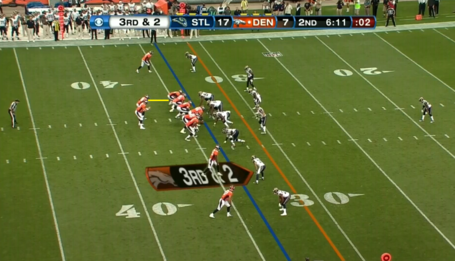 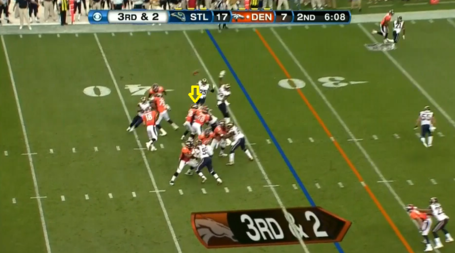 Good showing from both young players. If you're thinking of the play when Cortland Finnegan blew up Peyton Manning, Julius Thomas chipped him on a corner blitz going into his route. Peyton needs to get the ball out quicker, neither back messed up, if anything it was a miscommunication on the line.

Possibly. I'm not ready to give up on him with the depth chart quite yet. I still think both he and Montee Ball will be the predominant starters with Knowshon Moreno playing some 3rd downs. Also interesting to note, when the Broncos went into their two minute offense before the end of the half, it was Knowshon Moreno who was the RB. Knowshon is still a vital part of this team.

Back to Ronnie Hillman. I've tried to pour over each of his carries to find him being careless with the ball and I just don't see it. On both the fumbles he's lost, you can chalk it up to bad luck. On the first the ball is popped out by a helmet hit, on the 2nd his forward progress had been stopped. Now I'm not saying it doesn't bother me, but I've backed off of it a little bit. Hillman is the guy who is more capable of stretching the defense from sideline to sideline. He consistently gains positive chunks off tackle and is the only back on our roster that has proven that against the ones.

if the issue with Hillman persists, he won't be carrying the ball bottom line.

Pretty similar numbers from both running backs. One thing has become apparent to me. Montee Ball struggles on the outside, Ronnie Hillman struggles on the inside. I want to say that the majority of their respective bad running plays come precisely those circumstances. Hillman has 7 runs that have gone for negative, 0, or 1 yards, while Montee has 8.

Problem is, since they are so similar and since Montee Ball has no issues protecting the ball, he might be getting that much closer to becoming RB 1A on the depth chart.

Caldwell played some duel roles on Saturday. He split time with Jacob Tamme in the slot and also saw some snaps on the outside. He played well. There were two key receptions he made on the day. One was a quick slant on 3rd down with the blitz coming. Easy first down. The other was a gorgeous back shoulder throw down the field on the sideline on 3rd and 2.

I caught one instance on another play where he failed to pick up Manning's check. 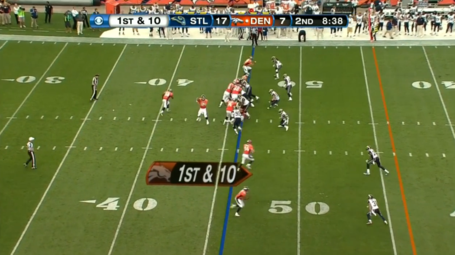 You can see the off man coverage. Manning is expecting that quick WR screen to Bubba here on the bottom. Bubba instead charges up field.

Manning pulls the ball back seeing that Caldwell is not ready and instead gets it to Tamme here on the same side. 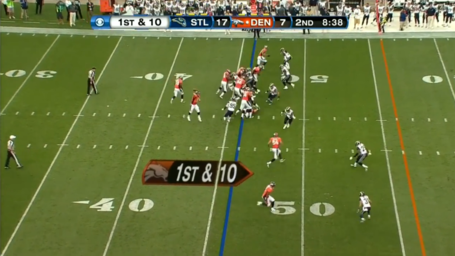 Regardless, "Bubba" is firmly entrenched as that 4th WR and can play the slot and outside. Remember that training camp practice where Wes Welker sat out and Manning targeted Bubba all day (and even cussed him out)? Tough love, the playmaking ability is there.

No offense to Chris Clark, but he's simply overmatched. It is disappointing that no one can challenge him for that swing tackle spot right now because it would be a disaster if he had to start for Clady. Remember earlier when I said Montee Ball struggles running off tackle? To be fair, most of his issues last game were because of Clark getting abused by Richard Quinn. 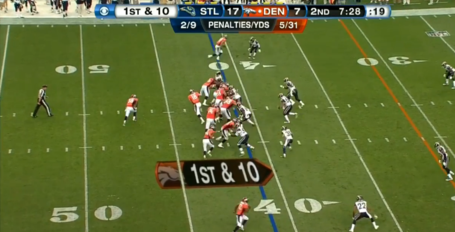 First issue, he lunges at Quinn and gets his head down. 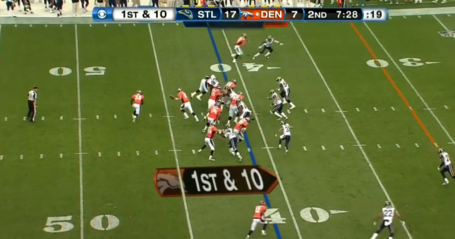 When you lunge and get your head down, you give away your leverage and Quinn tosses him aside like a rag doll. 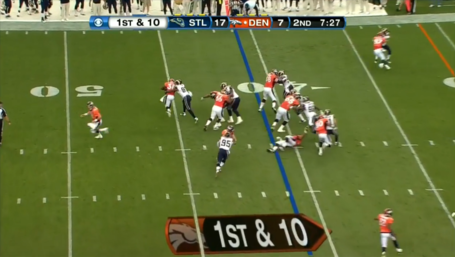 Just don't screw up on your block on a FG again ok? Other than that, he has now given me three straight games of good production, not only as a pass catcher, but as a blocker. I am really impressed with how he has consistently sealed the backside or blocked down on the edge when asked to. 11 personnel with him in the game, if he continues to be a good blocker, will be damn near impossible to defend especially with Wes Welker.

With Welker out of the game yesterday, Tamme saw some time in the slot at the same time Julius was playing TE. I still think the Broncos keep 4 TE's. But as of now, Julius Thomas is #1. Peyton Manning said as much in a radio interview with KOA following the game on Saturday.

The Rams played soft. Cover 2, zone with the LB's. I don't care. Manning went 15/20 in the 1st quarter when it was all said and done. Call dink and dunk if you want, he took what the defense gave him. His arm is stronger, want to know how I can tell? He's missed receivers deep because he's overthrown them. This is something he'll have to adjust to now that he is feeling better in that right arm. Peyton is going to light it up come September 5th.

BTW, he wanted to come in during the 4th quarter and throw the ball around. In fact if you can go back and rewatch the broadcast, speed up to the 2 hour 6 minute mark. I wish I could make a gif of this. Manning is asking John Fox something. Fox clearly mouths the word "NO" and is animated in his response. Is Manning asking to go back into the game? 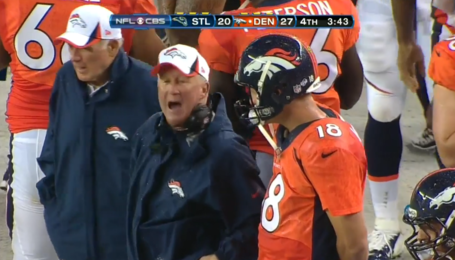 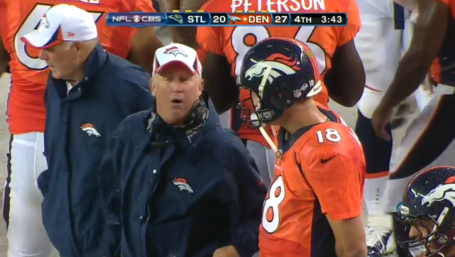 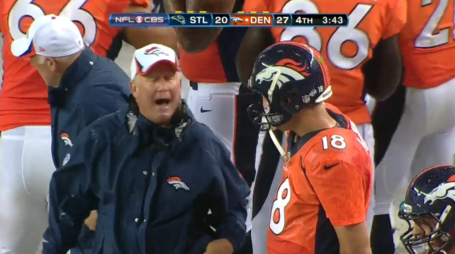 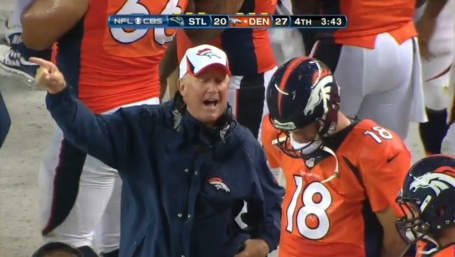 Von will be missed

Get off your soapbox already. Yeah you, stop the finger pointing, the judgements, all of it. Let's realize this situation for what it really is, sad. Von made so many plays in limited action during one half of play. He will be sorely missed for the first 6 games of the season.

Here he splits a double team off the edge to make the tackle in this play: 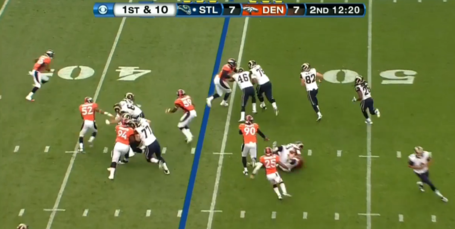 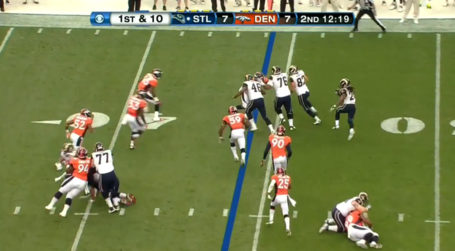 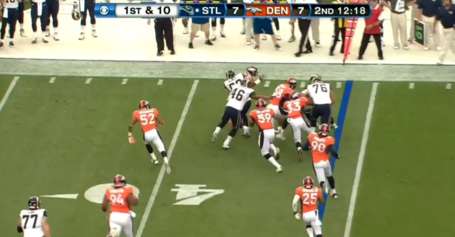 So what does our defense look like without Von?

Still not entirely sure. With Derek Wolfe also out of the game, the Broncos used Von as a DE along with the LB trio of Irving, Woodyard, and Trevathan.

On base downs it is easy, we should see Wolfe, Knighton, Vickerson, Ayers up front with the 3 LB's. If Champ is gone you will see Chris Harris on the Outside with DRC.

In the Nickel, you can see a similar configuration with Phillips taking that rush spot. Your DT's would be most likely be Sylvester Williams and Mitch Unrein. 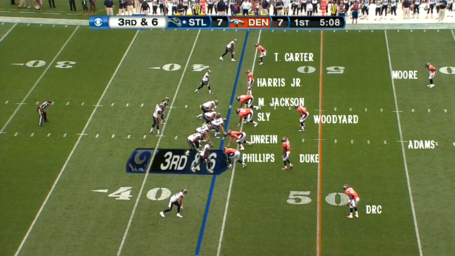 On this play Mitch Unrein and Sylvester Williams are going to run a DT stunt essentially switching positions. 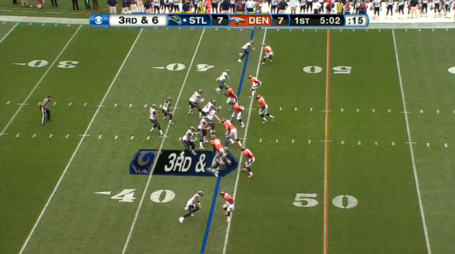 Mitch gets such great leverage and bull rushes his man back into Bradford's face. Great coverage on the backside. Play takes about 4 seconds. 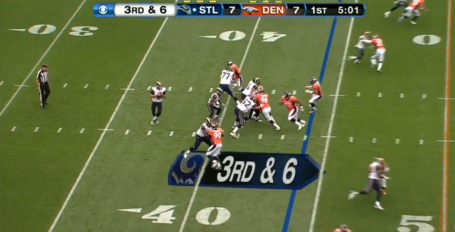 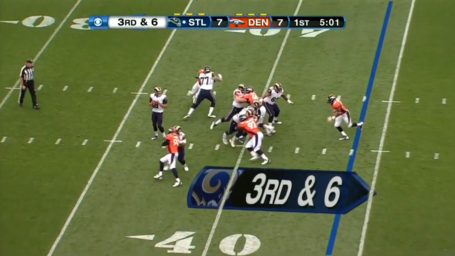 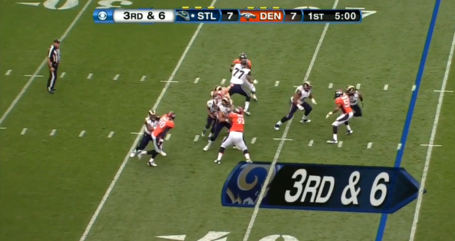 The Beef finally fattens up

Pot Roast and Big Vick had all kinds of big man penetration on the middle of that Ram line. It was good to see. Can't remember what beat writer said Knighton would be cut way back (Klis probably), but that's not the case. Hopefully their aggressive play transfers to the season opener.

Kayvon Webster gave DRC a breather throughout the first half. When he had an opportunity in coverage, he played well. DRC also played well in fact, I snipped this beauty from a play he made on a deep ball: 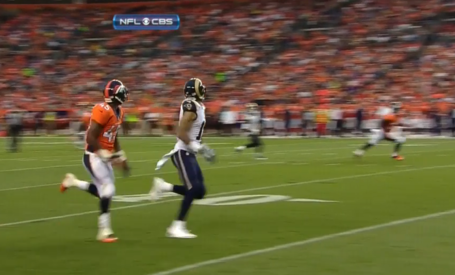 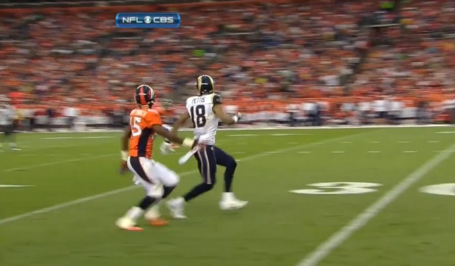 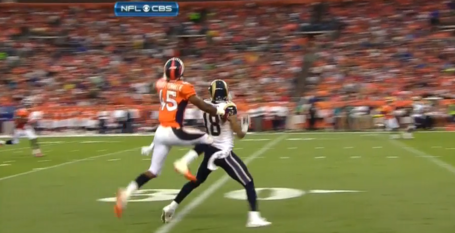 Why Dominique Rodgers-Cromartie is such a bad ass --->>> pic.twitter.com/KAXbZM6EQn

Chris Harris Jr. shut out Tavon Austin. The same Austin who almost ran a punt back for a TD. 1 catch for 12 yards is all the rook could muster.

I'll be back tomorrow to bring you my notes from the 2nd half. Hopefully by then I'll be able to make some sense of the mess that still remains in the backup offensive line spots. I'm pretty close to projecting my final 53-man roster, only a few questions remain.

If you have any questions, shoot!