Sprint right option. This is the play made famous by Joe Montana and Dwight Clark in the 1982 NFC Championship game. If you've never seen the play before--also dubbed "The Catch", here it is:

In 11 personnel with one receiver (Caldwell) to the bottom of the screen and both Demaryius and Decker up top, this version of it maintains the "level" concept and also adds a wrinkle with the rub route. By rub, I mean there are only two defenders to the receiver side of the field--essentially a one on one for Decker and Demaryius. Their route combination is meant to create a legal pick that will slow down and confuse each DB as to what man they should take.

The levels concept here is Decker's short out and Caldwell's crosser a bit deeper in the defensive secondary coming in the same direction. It creates a "high-lo" read for Manning with an added threat: Demaryius Thomas. 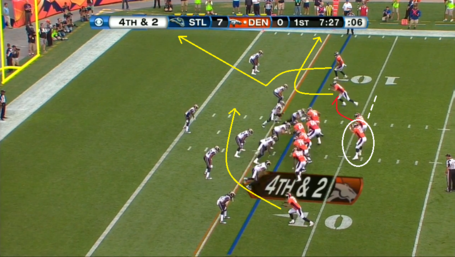 Hillman who is to the right will slide along in that direction and pickup any would be rushers. The line will be sliding their protection that way as well.

Notice the two DB's at this point, what is about to make this play deadly is 1) the guy in off man coverage (yellow arrow) is still keyed mainly on Demaryius Thomas. 2) The other defender closer to the LOS (blue arrow) is keyed on Eric Decker. Problem is, they are going to switch-er-oo so to speak. 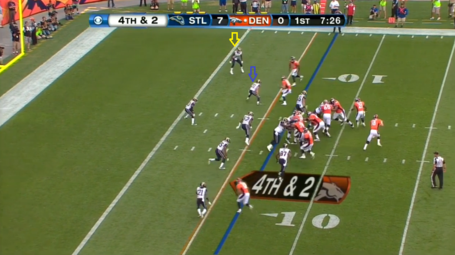 The switch leaves Decker wide open in the flat area for an easy first down....that is if Peyton Manning were only interested in moving the chains. Remember the double move by Demaryius? Looks right now like he's going to cross on a post or seam route straight forward. 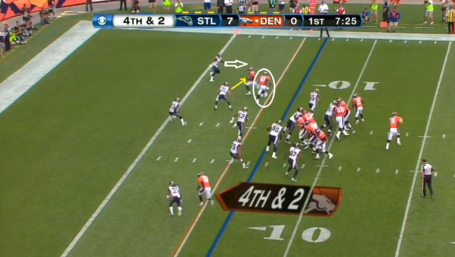 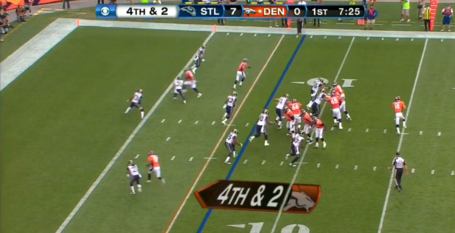 DT's big incut in his step on the last snip makes this man commit to the inside. Look at the other defender, he's now locked in on Decker in the flat. With Thomas about to bust his route back to the corner, it is all the space Peyton Manning needs to resurrect that moment in 1982. 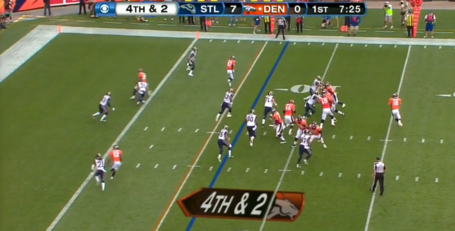 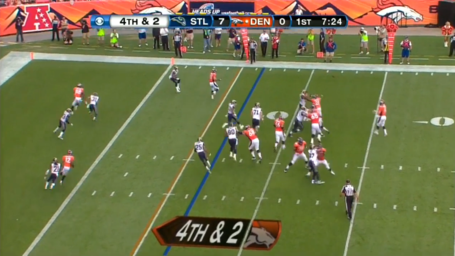 Decker's man now realizes what is going on. Thomas has more than a stride on his defender and the ball from Peyton is already out. 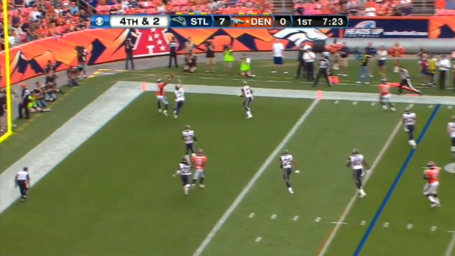 A perfectly placed ball where only DT can get to it.....DT=TD 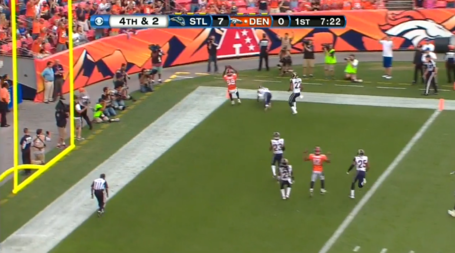 Watching this play live I did hear Manning say "Montana". I thought the other word he put with it was "Gold" or something like that. I made note of it but it didn't register to me that he was going to run "Sprint Right Option".

In hindsight it's easy to say "duh, roll Montana--"The Catch."

But if a guy like me--who knows the history behind that play was not wise to what was going on, you really think some young kids probably born at least 8-9 years after that play occurred would see it coming?

Nah, and neither did Peyton Manning. Part of what makes him so special. God I love watching him play....HURRY HURRY!!!