As promised I'm bringing you a look at how the Broncos manufactured pressure against Flacco and the Ravens via the blitz. I decided that instead of one ridiculously long post, I'm going to break this into quarters and have everything done by Saturday. Look for this format/series to be a weekly fixture until the Broncos get Von Miller back, or at least until he does something else stupid to jeopardize his season or career....

*Zone Blitz is a scheme that drops a normal pass rusher into coverage and brings a coverage player on a blitz. Think of it as a 1 for 1 trade. You're not necessarily bringing more rushers, but exchanging who rushes and who covers. It essentially keeps the numbers the same but creates some confusion as to the coverage scheme.

*Overload Blitz is when a defense attacks one side of the offense with more blitzers/rushers. If you divide the offense evenly to right v. left from the center, think of this kind of blitz as bringing more rushers to overwhelm or "overload" the protection on one side of the line.

The Ravens ran 20 offensive plays in the 1st quarter. 13 of them were passes, the Broncos blitzed on 5 of them and managed to pressure Flacco 3 times (60%). There were instances where I can say the Broncos "run blitzed" but I'm not going to focus on that aspect of the gameplan. Out of the 5 plays, the Broncos blitzed from 4 different front 7 alignments.

Here, out of their dime defense with a 3-man front, the Broncos choose to "overload" the left side of the Ravens line bringing both Duke Ihenacho and Chris Harris on the blitz. The Protection holds up and Flacco has plenty of time to hit his receiver for a first down. 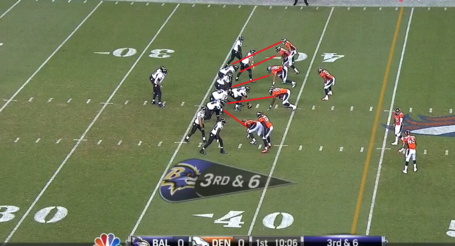 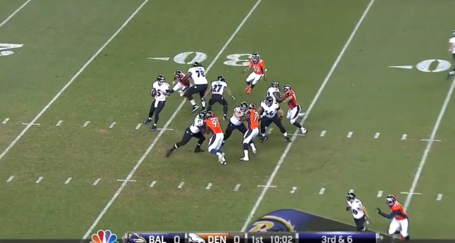 This next example is a good example of a "zone blitz". In their 4-3 defense with Shaun Phillips as the stand up DE on the right side of the Broncos formation, he's going to drop into the flat to cover while Wesley Woodyard comes from the MLB position to give the Broncos their 4th rusher. Remember it's not so much bringing extra guys, but creating confusion with the protection and coverage. Woodyard against Yanda is a mismatch in favor of the Ravens... 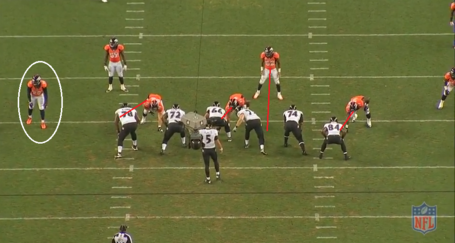 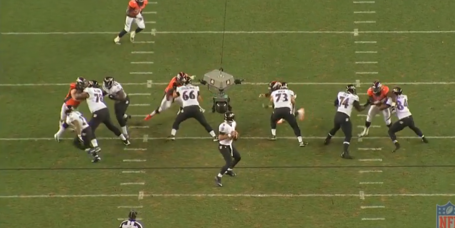 Here again the Broncos will drop Shaun Phillips into coverage from the LDE spot and bring CB Chris Harris from the opposite side. Only 4 rushers, but the mini "overload" of sorts flushes Flacco to his right and causes him to make a poor decision throwing to the opposite side of the field. Notice in the 2nd still how the Broncos line up their DT as a 0 tech. 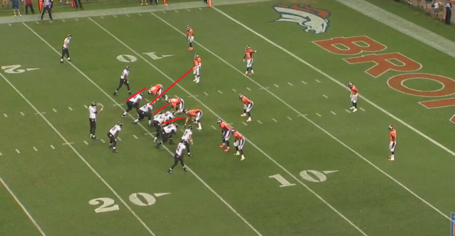 This is a neat play as the Broncos put 10 in the box. Initially, they rush 3 to the left side of the Ravens line with Vickerson garnering a double team between the C and G. Woodyard rushes up the weakside A gap and Ray Rice knocks him completely on his ass. What this does however is leave Duke Ihenacho free on that left side of that Ravens line with all blockers already accounted for. He reads the play perfectly and puts the pressure on Flacco as soon as he realizes there are no coverage responsibilities. Presnap, the NT shifts from a 0 tech to a 1 tech which allows him to take on two blockers. 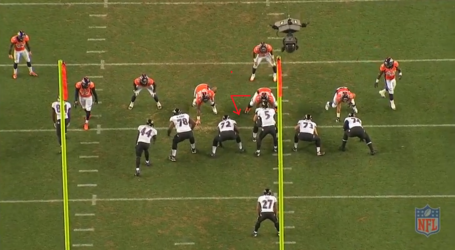 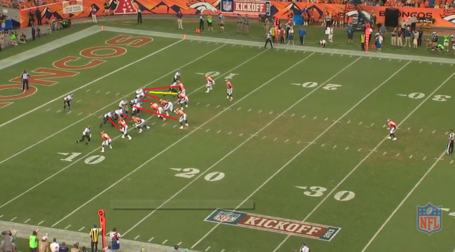 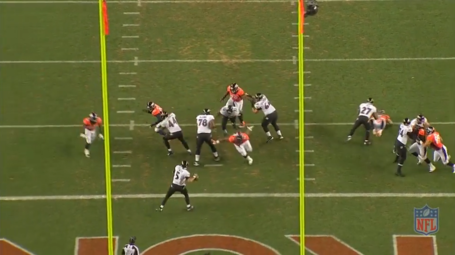 Here the Broncos combine a blitzing LB (Nate Irving) with a DT stunt. It gets the job done as Flacco hurries his decision. 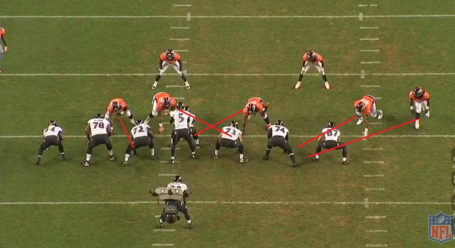 Del Rio is cookin' up some serious chow in Dove Valley. It amazes me the amount of combinations he uses to blitz to go along with the various odd shifted fronts along the line. I see a ton of variation in our line shifts to go along with stunts and various blitz types that are sure to keep the opposition guessing. The only players who aren't used to bring pressure seem to be Rahim Moore and Dominique Rodgers Cromartie, both of whom had vital roles to play in coverage. Everyone else contributes. The most underrated acquisition of the offseason was by far Shaun Phillips. This dude is giving Del Rio a ton of flexibility. Check back tomorrow for the next installment Broncos Country!