Well folks, what better way to spend some time on Sunday than to get acquainted with the enemy? Rewatching their effort against Dallas (besides the turnovers), a couple things jump out--they are pretty basic defensively. They really depend on their front 4 to get pressure and don't do a lot of exotic blitzing. They will stunt frequently and they are capable of bringing pressure both from the edge with Jason Pierre-Paul and Justin Tuck as a DT in passing downs. In fact let's take a look at their defense: 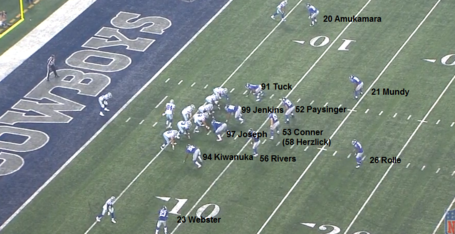 Dan Conner is out for the season so Mark Herzlick is going to take his spot at MLB. On the outside you will have Prince Amukamara and Corey Webster matchuped up with Demaryius Thomas and Eric Decker. Mundy and Rolle are your safeties to go along with a base front four of Linval Joseph, Cullen Jenkins at DT and Justin Tuck/Mathias Kiwanuka on the edge. In base downs Joseph projects as the NT and Jenkins as the UT.

Something that struck me as odd was that the Giants choose to leave their base defense out against a 3-receiver set from the Cowboys at times which I think would be a terrible tactical error against our offense. Herzlick allowed a long TD to Jason Witten down the seam last week and the thought of JT one on one with Mark should have Manning and Gase salivating. #52 Spencer Paysinger actually held up well in coverage but do you want him covering Wes Welker? Welker against a LB or S is winning any day of the week for the Broncos offense.

Like last week, I would expect a ton of nickel defense to combat the Broncos extensive use of 11 personnel so lets take a look at that wrinkle. 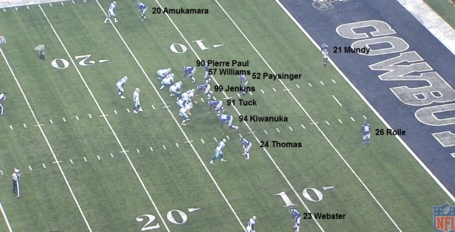 - On the inside Tuck moves to the 3-tech and will likely be matched up against Louis Vasquez. Jenkins will slide to the 1 tech over Manny Ramirez, and pass rush specialist Jason Pierre Paul will line up against Ryan Clady. I did not notice a ton of variation in moving JPP around the formation but I suppose it could happen.

The next thing to note is the nickelback #24 Terrell Thomas. He struggled a bit last week allowing 5 receptions on 5 targets against Miles Austin. Didn't allow big yardage or TD's, but Wes Welker should have a favorable matchup.

It will be interesting to see how the Giants approach the running game this week. Brandon Jacobs certainly gives them the security of knowing the system and familiarity with Eli Manning. I see the Giants primarily as a two-back team in their base offense. With this alignment they will use Victor Cruz and Hakeem Nicks on the outside. With Champ Bailey out this would likely pit Chris Harris Jr. on Victor Cruz and Dominique Rodgers Cromartie on Hakeem Nicks.

The Giants went out and got a former Raider in Brandon Myers at TE. I did a series last year "covering the TE" and here were the results on Myers

Not that great of a success rate, I like the matchup of Trevathan on Myers. 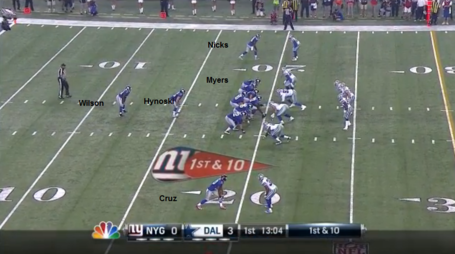 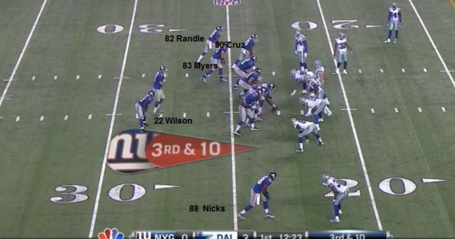 Here's where things get interesting. Nicks remains as the "split end" on the outside like a Demaryius Thomas. In 11 personnel however, Victor Cruz will be moved inside. Here he is grouped with TE Myers and 2nd year player Rueben Randle. What this should do is put Tony Carter on Randle and Harris Jr. will kick inside to cover Cruz. If we are in Nickel, Danny Trevathan will take on the TE with WW in coverage against the back. If we are in Dime, look for Duke Ihenacho to take over the coverage against Myers.

I did see some instances of a pure 4-WR set with #12 Jerrel Jernigan. This is the exception and not the rule however and with the secondary being a strength of the Broncos it shouldn't be an issue.

If the Giants wanted to spread our defense out and minimize the threat of extensive blitzing it might be a smart thing to utilize the 4-WR set a bit more. It at least takes some options away as the Broncos have shown a tendency to blitz a Safety.

I'm just going to say it now. There is no chance in hell the Giants can man up on our receivers and win consistently. Just won't happen. They are going to have to win upfront, and they are going to have to cause some bad decisions by Peyton Manning. To that end the key matchups up front will be Justin Tuck on Louis Vasquez, Cullen Jenkins on Manny Ramirez. Pierre Paul is going to win some of his matchups on the edge. I think he's a better pass rusher than T-Sizzle and Suggs had his moments last week. If Jenkins and Tuck can be disruptive in the middle, Peyton will not have any room to step up on.

Victor Cruz v. Chris Harris Jr. Both are UDFA who have quickly risen to become the best at their positions. This will be the premiere matchup of the evening and I'm looking forward to how Harris handles him more on the outside when the Giants come with their 2-back look. I like the idea (from the Giants perspective) of trying to confuse the coverage at the LOS with bunch and stacked looks involving Cruz.