Looking back at Sunday's performance, Knowshon Moreno had a hell of a game including two fantastic TD runs to the outside. What exactly happened on those plays?

Share All sharing options for: Knowshon Moreno: A twin killing

Zone Blocking at it's best. 12 personnel with Julius and Virgil. Julius is lined up wing left with Virgil coming in motion to the right of the formation. Manning is undercenter with Moreno 7 yards behind in singleback alignment. Both WR's are split to opposite sides with Demaryius to the left and Decker to the right. Giants are in their base 4-3 with 7 in the box and a safety creeping close to the LOS on the boundary side of the field. 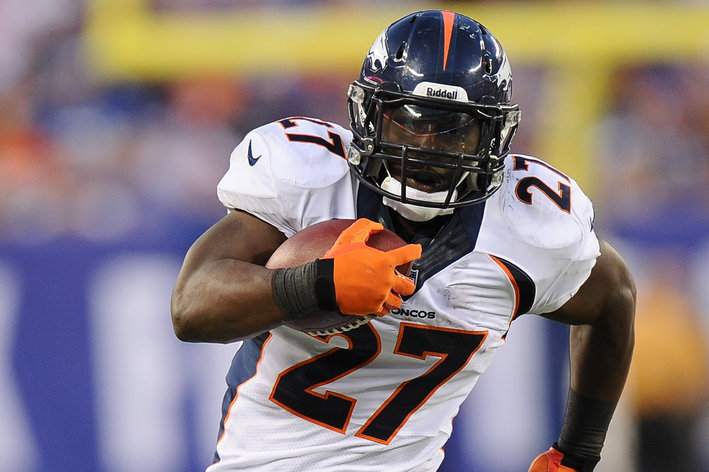 Knowshon Moreno has been nominated for the FedEx Ground Player of the Week award on NFL.com. Vote!

The play begins with most of the line slanting to the right. Julius cuts off the backside end and then executes a cut block on the 2nd level. Clady fires out to the 2nd level immediately and is able to take on the WILL.

Orlando Franklin and Virgil Green have a tandem block. Their goal is to set the edge and seal off #94 as the run will come around the corner. Very important, once Green and Franklin have the end under control and out of the equation, Green peels off and stonewalls the SAM LB pursuing the play. He absolutely cuts off any pursuit coming playside and is the major block to set Moreno free down the sideline.

One final note, Eric Decker throws a nice block as well and is able to effectively keep the corner from interrupting Knowshon on his path to the endzone. From there, Moreno lowers his shoulder and powers his way the last bit of yardage into the endzone. Great design, execution, and determination! 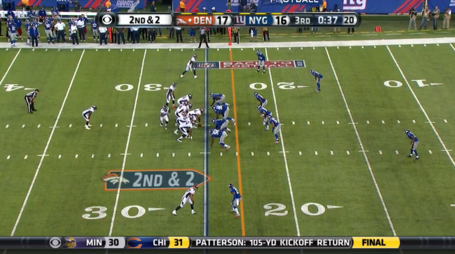 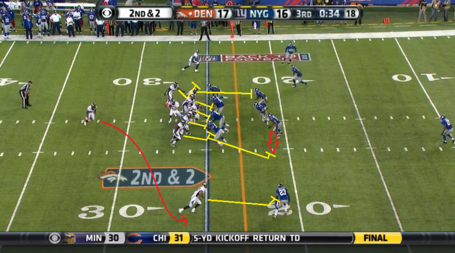 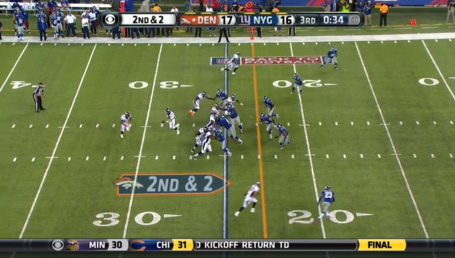 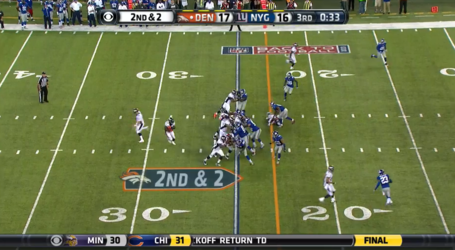 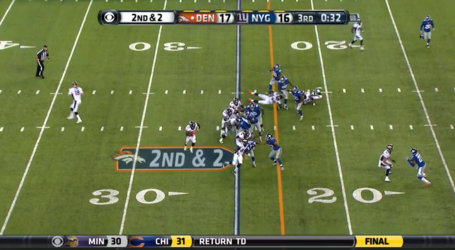 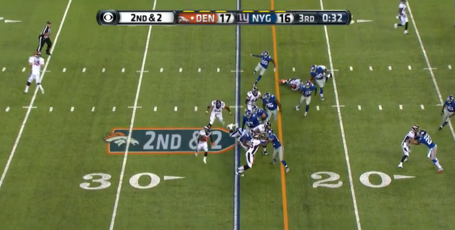 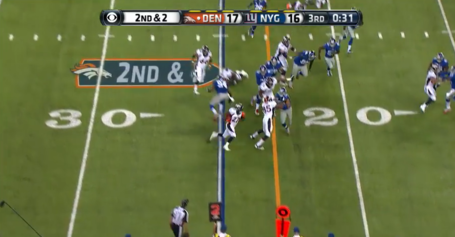 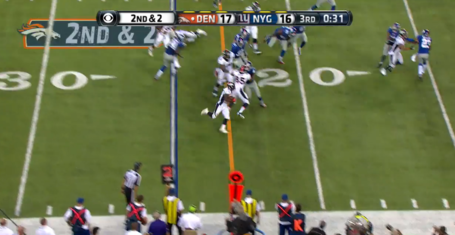 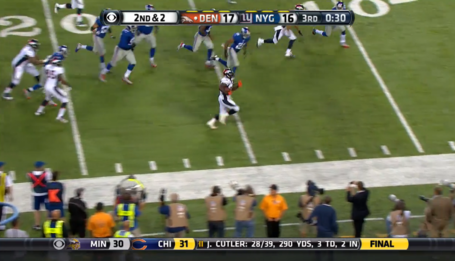 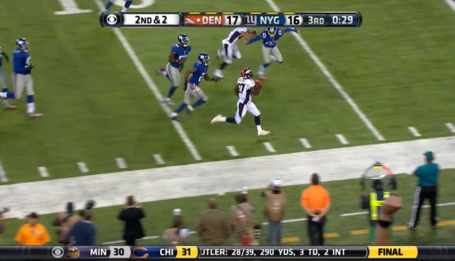 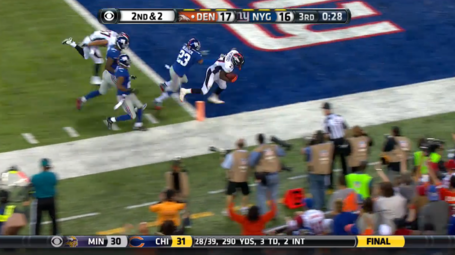 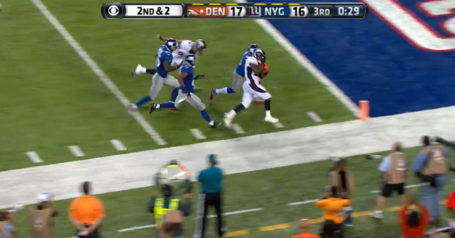 11 personnel with Julius Thomas and Wes Welker. 2 by 2 formation with Demaryius and Welker split left, Julius tight to Orlando Franklin and Decker split to the right. Shotgun formation with Knowshon on Peyton's right. Giants are in their nickel defense, 6 in the box with safeties showing Cover 2.

This is a variation on their "pin and pull" outside stretch. The key blocks here are Julius Thomas sealing off Justin Tuck at LDE, Franklin getting out in front to help with this and possibly the SAM LB or SS, and Eric Decker sealing off the corner to the inside to open up a wide lane to the sideline. Clady seals off the backside, Beadles helps with that block then fires to the 2nd level to take on the FS. Manny Ramirez fires into the 2nd level and throws a beautiful block on the MIKE LB.

Julius seal off of Tuck is a great success and also cuts off the SAM LB, Decker beasts his man successfully to the inside, and Franklin is the entourage throwing blocks 15-20 yards downfield on the safety. Knowshon once again lowers the shoulder and gives a great effort to finish the run to the endzone. The pin and pull stretch is such a beautiful thing when executed correctly! 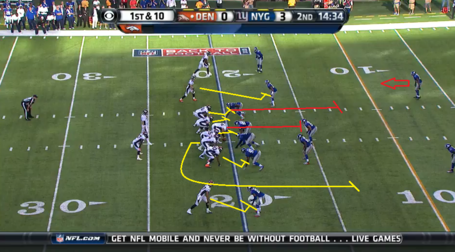 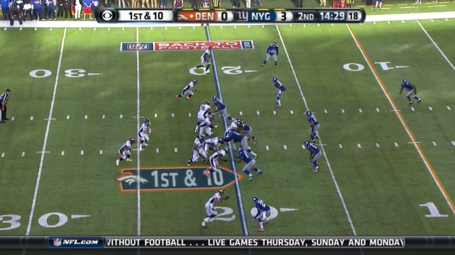 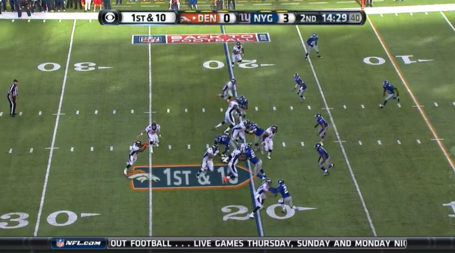 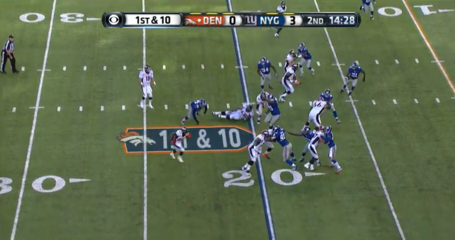 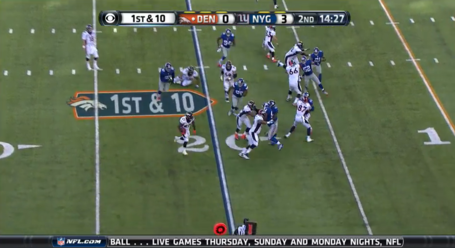 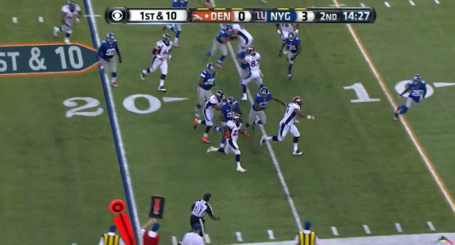 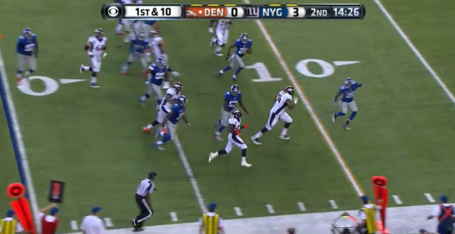 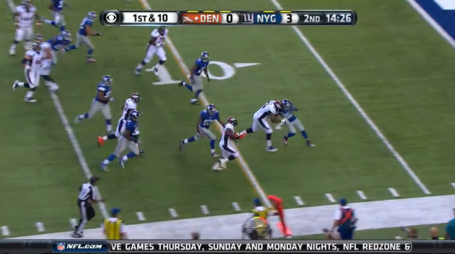 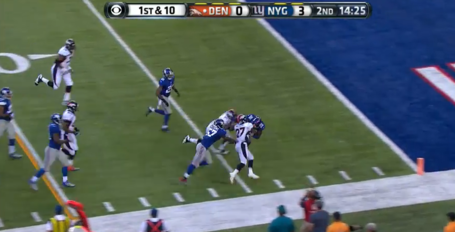 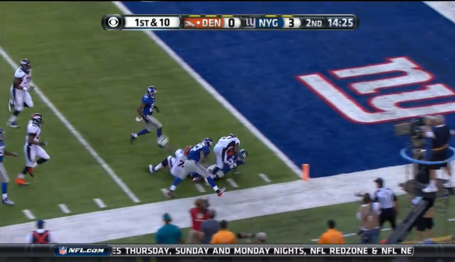 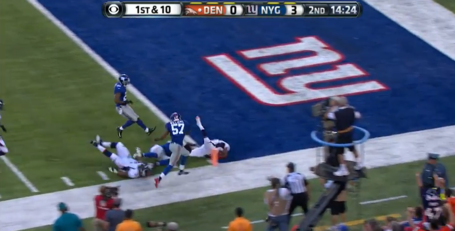 Both of these plays were near flawless in design and execution. Any rushing attempt has a lot of moving parts and on both of these plays, the band moved in concert with each other as the Maestro Knowshon Moreno did his dance. I'm sure glad to have Knowshon leading the Broncos rushing attack, he's the perfect back for a Peyton Manning led offense!

Until next time MHR, GO BRONCOS!!!