The Oakland Raiders defense is currently ranked 5th in the league in yards per game having allowed an average of 261.0 yards through the first two weeks of the season.  They are ranked 5th in passing yards per game (180.5) and 10th against the run (80.5).  Their defense has allowed a total of 30 points against the Colts and Jaguars which is good for 3rd best in the NFL.

Some of these numbers are inflated.  The Colts are middle of the pack as far as offensive production and the Jaguars are pathetic and dead last in just about every major offensive category.  Still, it isn't as if the Raiders are just padding their numbers against inferior competition, they look good as a defense.  At times, they mirror exactly what the Broncos have done with their 5-2 looks and coverage schemes.  Dennis Allen is a good coach and I believe he has them on the right path.

Overall, the Raiders lead the league in sacks so far with 9.  Like Denver they have gotten pressure from a variety of spots.  Tracy Porter has 1.5 sacks, Tyvon Branch, Brandian Ross, Usama Young each have one.  Those are all secondary guys meaning we will see some corner and safety blitzes.

When it comes to pressure up front, both of their defensive ends have delivered.  Former Bronco Jason Hunter leads them with 2 sacks and Lamaar Houston has added another.

As far as the linebackers and secondary Nick Roach (19 snaps 2 pressures), Kevin Burnett (15 snaps 3 pressures), Sio Moore (13 snaps 1 pressure) as well as Tracy Porter (9 snaps 1 pressure) and Brandian Ross (12 snaps 0 pressures) lead the way in pass rushing attempts.  No one from those groups has a positive grade in this category.

This has been the key to their success so far.  They've been able to shut down the opposing teams running games which has kept them in favorable 3rd down situations.  Three out of four starters on the Raiders defensive line and every starting LB along with DB Brandian Ross grade out positively in the running game.  The Raiders thus far have been very disciplined in their gap control and it shows up in the statline.

SS Tyvon Branch will be out of the game with a broken leg.  In his place Usama Young and Brandian Ross will share the responsibility. Sio Moore, Charles Woodson, and Mike Jenkins all grade out positively against the pass.

I've seen Woodson used in the deep centerfielder role quite often (think Rahim Moore).  Not a lot of Cover 2, but just like the Broncos a lot of Cover 1.  They mix things up of course but their defense reminds me a lot of what the Broncos ran last year as far as man coverage and their 4-3 concepts.

Keep in mind with Branch out, both Young and Ross will get snaps in his place. 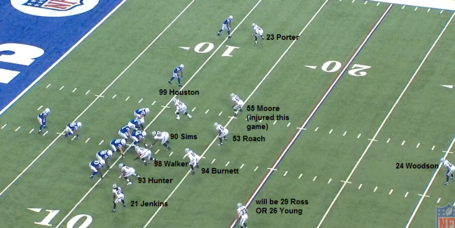 Pretty standard.  Here they shift their linebackers over to the weakside of the formation. Press man from Porter, Branch in more of a run "robber" role.  Again, note that they don't really flip and switch their DE's.  You will almost always see Hunter at LDE and Houston at RDE.

Shift one of the linebackers to the LOS and you have a variation on the 5-2.  Same concept the Broncos use with Von Miller to the strongside of the formation. 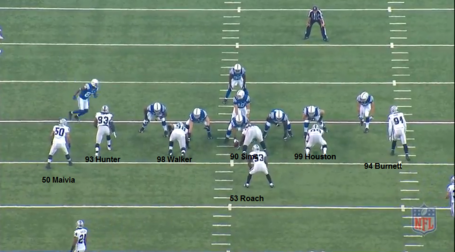 Hayden is your nickelback.  In this play they will blitz 6.  The off coverage across the board hints they might be on Cover 1 which they are.  Luck sees it and Reggie Wayne beats Tracy Porter to the corner of the endzone for a TD. 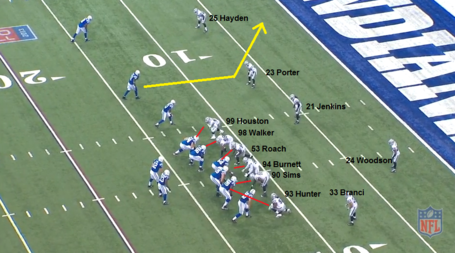 The Raiders like to run a 3-2 variation of the Dime with #98 as the NT.  Same rush ends with both Roach and Burnett as the linebackers.  Burnett is what you would consider their coverage linebacker though Sio Moore could probably fill the responsibilities as well.  On this snap, the 3rd safety in the formation (Ross) comes off the edge on a blitz.

Lamar Houston has been a disruptive force so far.  Now he gets to matchup against backup Chris Clark.  If I'm the Broncos I chip a man all day to that side.

Tracy Porter is that boom or bust player we all saw last year.  The interesting thing I noticed from last year was that he was amazing at reading and diagnosing those short routes.  He jumped a couple and almost got a pick.  He can be fooled by double moves and be beaten deep, but I would be careful with him underneath.

DJ Hayden looks to have slot responsibility against Wes Welker.  He looks pretty decent from what I've seen.  I'll take this matchup all day though.

Julius Thomas looks to have a pretty solid matchup against Kevin Burnett.  Whether the Broncos choose to run more 12 personnel or 11 personnel is not the question.  Burnett will have that matchup all day.  The question is whether or not the Raiders will choose to bracket JT or Welker for that matter with Charles Woodson.  I am confident we can win outside, but I'm more intrigued on attacking the middle of this Raiders coverage scheme with two potent weapons.

Sio Moore was a personal favorite of mine from this past draft. Even though it didn't make a lot of sense, I wanted to see him in Orange and Blue haha.  He's a playmaker and a three tool linebacker that can play the run, cover, and rush the passer.  I will be interested to see how they use him in situational football.

Overall, I see a pretty simple defense that is solid with fundaments and technique.  We aren't going to see a lot of flashy scheming or blitzes a la Jack Del Rio, but Dennis Allen will have his defense prepared and I'm seeing them play more disciplined than they have in the past.

Check back tomorrow MHR when I take a look at their offense.  If you're a Raider fan and can read fonts other than "Old English" share any information you have about your team, and if I got something wrong let me know as well.