Happy Monday folks! Normally I would have separate posts for an offensive preview and key matchups, but I decided to combine them for one very good reason: The Raiders offense is pretty easy understand. Run, run some more, zone read run, maybe throw the ball.

It's a bit fun watching their offense because it is like a flashback to 2011 and the glory days of Tim Tebow. I'll get this straight right now, Pryor looks better and is more accurate throwing the ball than the Teebs, but he probably isn't going to light up the scoreboard with the weapons he has going up against our talented secondary.

The Raiders are dead last in the NFL with an average of 157.5 passing yards per game. That total is buoyed by 198.5 rushing yards per game which puts them 2nd in the NFL behind the Eagles. Pryor has put up 162 yards on the ground while Darren McFadden has totaled 184. Before the slate of games yesterday, both were top 5 in the AFC in rushing.

Amongst the TE's, only #81 Mychal Rivera and #85 Jeron Mastrud have registered catches. Rivera has 5 so far for 43 yards while Mastrud has 1 for 41 yards. #86 David Ausberry will be out of tonight's action.

The Raiders have been pretty stout up front. Only G Lucas Nix grades out negatively in both pass blocking and run blocking. His numbers are terrible. He's allowed three sacks and 6 total pressures in two games thus far. By comparison, the rest of the Raiders line COMBINED have given up 7 total pressures.

As expected, the Raiders run a ton of two back sets to go along with some heavier 2 TE sets. I've seen them run plays out of 11, 12, 21, 22, and 20 personnel. They mix things up a bit but as a result the Broncos will have ample opportunity to mix and match as well.

Strength against strength. The Raiders are #2 rushing the ball, the Broncos are #1 defending the rush. Some might think that the Broncos defensive numbers are inflated by big leads. Truth of the matter is they were in a one score game with Baltimore halfway through the 3rd quarter and a one point game through three against the Giants. The Broncos for the most part have shut things down and they've done so through stellar front 7 play.

The Raiders present a more formidable challenge than the other two opponents have provided. But that works both ways. For now, lets take a look at the "read option."

Something interesting I saw was the use of Darren McFadden in the wildcat role. This is a bit different than "standard wildcat" however as McFadden has the option of handing off or keeping just like Pryor. Could there be options for him to pass the ball? I would guarantee it.

Here he's in shotgun, Jacoby Ford comes into motion from the left McFadden fakes the end around and keeps it up the gut for 5 yards. 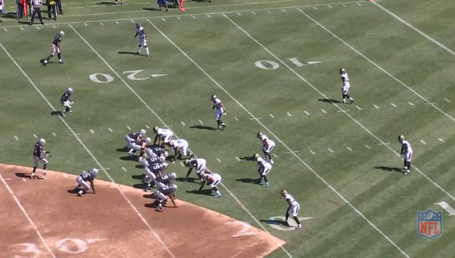 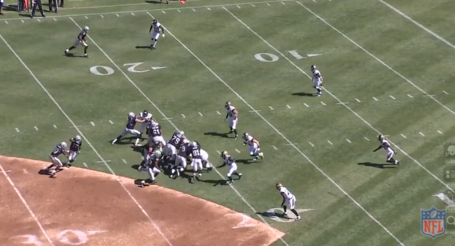 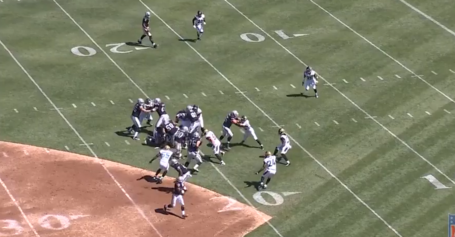 So much of defensing the zone read depends on the play of the DE. If they crash down to take the ballcarrier, the QB can keep it around the edge. If they stay disciplined, the QB will hand it off. With extensive use of FB Marcel Reece, the Raiders have added a wrinkle to this cat and mouse game that can completely take the end out of the equation.

Lined up in shotgun formation, both backs are with Pryor--Reece to the Left, McFadden to the right. Pryor will keep it here and the design of the play takes Reece to the outside edge where he effectively takes two people out of the play. As a result the play is wide open and Pryor goes for 29. 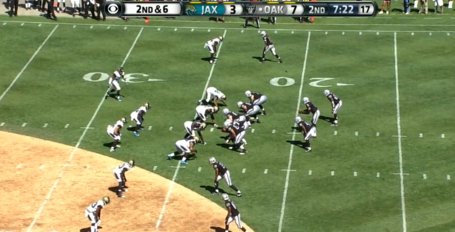 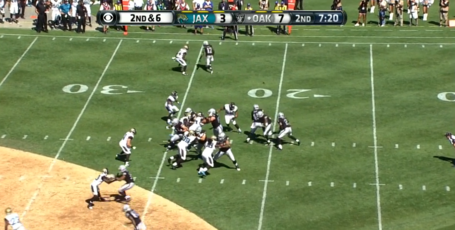 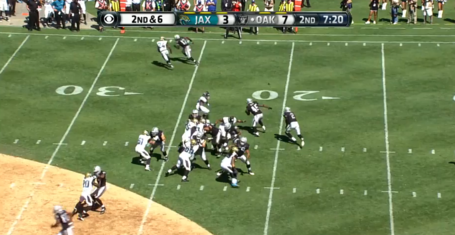 The Broncos have been so successful with their front 7 against the run. Our bigs have to clog the middle and allow our ends to remain disciplined. DB's have to have their head on a swivel in case the run makes it to the 2nd level. Man free teams struggle against rushing quarterbacks because the defenders will almost always have their backs to the ball. One way to remedy this is to use more zone coverage, which against a passer like Pryor is certainly an option.

The Broncos can also choose to use a "QB spy" on obvious passing downs. The sum total of this player's assignment is to make sure the quarterback has nowhere to run should he pull the ball down and decide to scramble. Last year against Carolina, the Broncos employed the skills of Von Miller to shadow Cam Newton, and Miller had a beast of a game.

Here, I think the Broncos could use a variety of approaches especially given the lackluster performance of the Raiders in the passing game. They could choose to use Wesley Woodyard or even Duke Ihenacho as part of that robber role. I expect the Broncos to play quite a bit of their 5-2/3-4 front this game especially against a team that might not be looking to run a 3-wide look all that often.

If the Raiders counter using a 2 back 3 WR set (which I've seen them do), it could put the Broncos in a situation to use their nickel defense more. Then we would see more of the "nickel bigs" front with Ayers/Wolfe as ends and both Vickerson and Knighton in the middle.

Chris Clark watch game 1 begins against Lamarr Houston. The Raiders do not move their ends around like the Broncos. So it won't be Jason Hunter against Clark, it will be Houston. Against the Colts Houston had a sack to go along with 1 hit and 6 hurries. The following game, he had two hits and 6 hurries. That is 16 pressures in two weeks which had him sitting #1 overall in pass blocking efficiency.

The Broncos want to run a lot of 11 personnel from their offense, the Raiders are one team I think they could get away with that against. Hunter doesn't figure to have a monster of a game against Orlando Franklin and they Raiders don't really generate a pass rush up the middle. If Clark is getting beaten on a consistent bases, then the Broncos could like up Julius Thomas off of LT and have him chip Houston coming off the line.

Gase and co. could also choose to run a lot of 12 personnel looks. This would be my choice especially with Joel Dreessen coming back from injury. The Raiders shouldn't be able to light up the scoreboard so if the Broncos wanted to fine tune things or get a better feel from different looks, this is the team to do those things against.

Even with a good edge rush from the blindside, Peyton has shown good ability to sense the pressure and step up into the pocket.

A year ago--especially against backs and tight ends, Porter looked really good in the short to intermediate passing game. He even jumped a couple of routes on Tony Gonzalez and could of had a pick. I remember noting then that he could play that matchup role against TE's.

Whether or not he can matchup up with Julius Thomas will remain to be seen. But according to a couple of Raiders fans, he does figure to play the slot corner role against Wes Welker tonight.

Porter is a gambler. He's not afraid to trust his instincts and as a result made some big plays (the INT for a TD against Peyton in the super bowl comes to mind) and some big mistakes (that game last year against the Texans comes to mind). I'm not sure if he can hang with Welker, but the Broncos will want to vary the kinds of routes they run with him against different looks. Porter has the ability to see the big picture eventually and he could very well put himself into a position to make a big play against the Broncos if they don't do a good enough job changing things up.

Nix is questionable but should play tonight.  After mapping out the Broncos defensive line and how they play techniques, Knighton and Vickerson don't really switch sides, but they will vary which one plays the 1 tech or the 3 tech.  Knighton will get plenty of looks against Nix who has allowed 3 sacks already this season.  Knighton has been very close the past couple of weeks and has shown the ability to get some pressure from the inside. I wouldn't be surprised to see Knighton end up with a sack or two tonight.

Darren has had some good games against the Broncos historically. But against defenses coached by Mike Nolan (2009), and Jack Del Rio (2012), McFadden has rushed 48 times for 205 yards (4.3 AVG), and no TD's in 4 games. Both defensive coordinators were able scheme and help keep him from having monster performances.

Lots of turnovers and good fortune is the only way the Silver and Black win this game: