Hello folks, this past week was an eye opener of sorts as to how the Broncos will approach things this season defensively.

Some of what I saw was game plan specific. Including a tactical decision to line Rahim Moore at considerable depth off the LOS so that there would be a better safeguard against the potential speed of the Ravens' outside receivers. In this shot, where the Broncos stack 10 in the box and bring an all-out blitz he lines up 25 yards off the line. 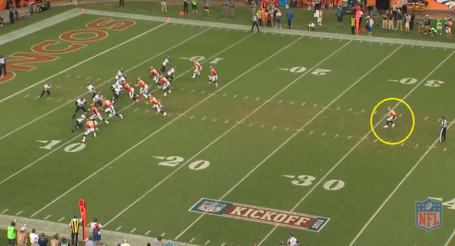 Going through and charting the first few drives of defensive calls, I really have to give it to Jack Del Rio for throwing the kitchen sink at Joe Flacco. So many different fronts and even coverage calls were peppered throughout the first nine defensive snaps.

Now let me clue you in to why I labeled certain things the way I did.

From our standard nickel formation last year, you might remember that we used Dumervil and Von Miller as our bookend rushers, and smaller more athletic DT in Derek Wolfe and Mitch Unrein in the middle. Well this year (and it could be game plan specific for the Ravens), I saw quite a bit of our "base" offensive line in the nickel defense with the standard alignment. Ayers at RDE, Knighton as the 1 tech, Vickerson as the 3 tech, and Wolfe at LDE. This seems to give the Broncos the best of both worlds. They can match their secondary against any threat and also match their line to be able to counter the run. 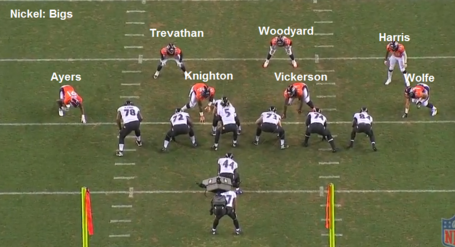 What this did was effectively match Chris Harris up with their TE Dickson and leave the RB/FB responsibilities to Trevathan and Woodyard.

The robber is traditionally a role that allows a player to read the play and defend both the run and pass. Well, Duke Ihenacho and his amazing range is the player that fills that role. Seeing it in action, it allows Rahim Moore to take a greater depth and play centerfield in the true sense of the term. It allows the Broncos to bracket their coverage against a slot receiver or TE.

Saw Duke make a ton of plays with this "free" responsibility. Here's a look at him eyeing in coverage. 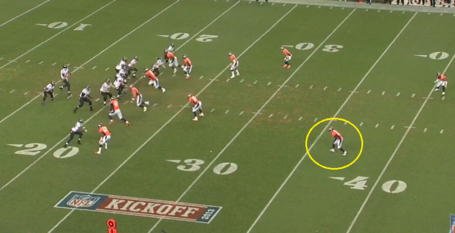 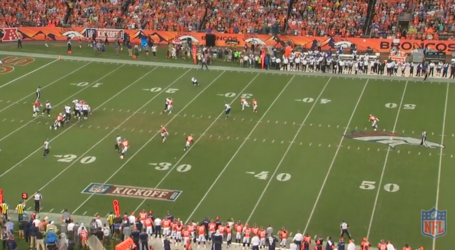 Now this really isn't an example of textbook robber play, I just wanted to point out that he seems to have a lot of freedom to read and react.

Pretty standard. The Broncos will use what I like to call their "pass rushing front 4" with Wolfe/Jackson inside to go along with Phillips and Ayers at the end. 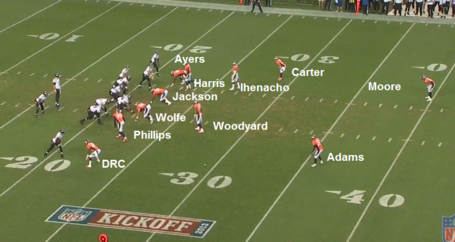 Now, do you notice Duke pretty close to the LOS? He's used several ways. One is as a blitzer, the other as another man to man coverage guy which brings me to my next observation.

Remember all offseason how we speculated who that would be? I can safely say the Broncos have three men that cover that responsibility depending on the team and situation. On base downs it can be LB Danny Trevathan. Against 2-back heavy teams like the Ravens it can be Chris Harris as in the example above. On 3rd downs it can be Chris Harris or Duke Ihenacho depending on whether the Broncos use Nickel or Dime. Flexibility and scheme versatility is a great thing to have!.

3-2-6 Dime and dropping others into coverage...

This was a weird play all around. You can see the alignment of the front line makes this more of a 3 man front with 2 LB's (Woodyard and Phillips). Wolfe is the 7-tech, Jackson the 0-tech, and Ayers the 9-tech. Phillips will drop into coverage in the right flat, Harris and DRC play zone behind. On the other side Carter and Ihenacho blitz making it a 5-man rush and Woodyard/Moore play zone on the left side.

DRC messed up his assignment on this play and allowed a 29-yard gain. The Broncos in general look uncomfortable as a team playing zone coverage.

Finally, I saw a little cover 3. This is a coverage shell whereby the two outside corners and the safety each take deep responsibility for a third of the field. It is easy to spot because the outside corners will take a trail position right from the snap: 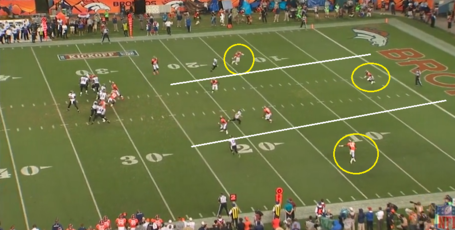 Later this week I hope to bring you a look at some of the blitzes Jack Del Rio dialed up. It is a fantastic thing to have a D-Coordinator that is a mastermind when it comes to strategy and also uses his players in the best ways possible.