There is no way around it, the secondary and all the shuffling around due to injury has turned the Broncos defense into a ticking time bomb waiting to explode. This time around it happened late in the game against San Diego. I want to examine one play and show you what happened.

This is the bomb to Keenan Allen on 4th and 5. It looks to me like the Broncos are playing quarter/quarter/half coverage or Cover 6. Basically you'll have three deep with two taking a quarter of the deep responsibility fieldside and the other safety taking half of the field on the boundary side. The corner to the boundary side is playing Cover 2 technique. With the ball on the left hashmark think of the field side as being everything to the right of that and boundary side being the space to the left.

Anyway this is going to leave Quentin Jammer on an island against Keenan Allen. You can see from the snap that Jammer is going to open up his hips for a trail technique. Keenan Allen is going to run a sluggo route (slant and go). It gets Jammer to bite and get completely turned around when Allen cuts back across him to the outside. David Bruton's reaction to the underneath route tells me he does not have deep responsibility as in Cover 2 so Jammer is all by his lonesome. 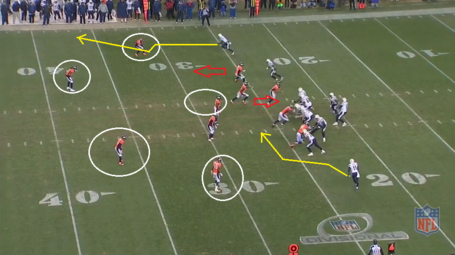 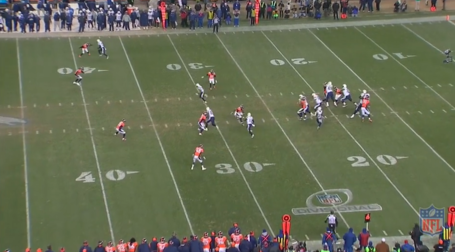 You can see here Jammer set to defend the slant 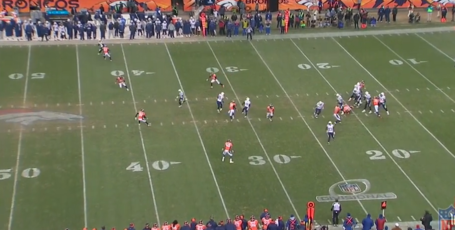 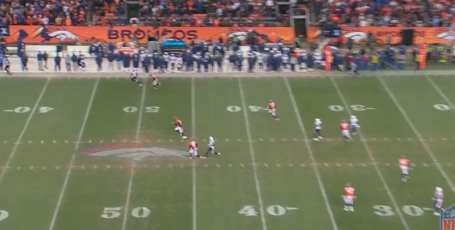 Jammer is so lost after that initial mistake, it takes Allen no time to get a couple of steps on him.

I have no heavenly idea why Del Rio would think it is ok to match Jammer on Keenan Allen, especially with no safety help. If I'm misreading the coverage and Bruton was supposed to help, then that mistake is an example of something that our safeties do routinely: bite on the underneath route while abandoning their deep responsibility.

Later on this evening my first look at the Patriots is going to break down Shane Vereen and how he is used in their offense.