Happy Saturday Broncos Country! Here is a detailed look at the enemy and what our Broncos offense will be up against next week.

The Patriots are a hybrid team that will mix up fronts from 4-3/3-4. It really doesn't matter. The flex guys are Chandler Jones (lines up most of the time with a hand in the dirt) and Rob Ninkovich (you could consider him your rush LB, will stand up most of the time).

Going to the inside, DT Sealver Siliga will line up against the offensive left meaning he will be playing a 3-tech or 1 tech most of the time against Zane Beadles. Rookie Chris Jones will line up in this configuration against Louis Vasquez.

Against base offense or heavy personnel (2-backs/2-TE) you will see a LB corps of Donta Hightower and Dane Fletcher inside with rookie Jamie Collins lining up outside as the WILL.

In fact here is a shot of how they chose to lineup against the Colts 2-TE formation: 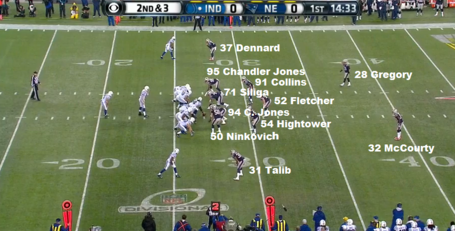 Here DT Chris Jones two-gapped as a 4-tech against the RG, and Siliga attacked from the 3-tech spot against the LG. Ninkovich is that hybrid player and in this snap shot you could call the Pats front a 3-4 if you wanted to. Don't get caught up in labels though.

Against the Broncos, who are likely to run about 80-90% of their plays from 11 personnel, this is how the Patriots might stack up: 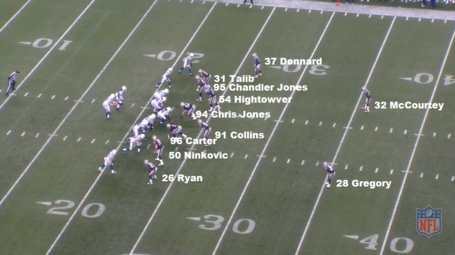 I know it looks like a mess, but that's what bunch formations do to a defense. Colts have 3 WR. Interesting that the Pats put Talib on Hilton in the slot. Actually not that interesting--take note Jack Del Rio, this is an instance of a defense putting their best corner on the other teams best receiver. Cool idea huh? Anyway you have Chandler Jones and Rob Ninkovich as your rush ends and Chris Jones and Andre Carter as your DT's. This will be interesting to keep an eye on. Sealver Siliga isn't much of a pass rusher. He does have a couple of sacks, but this isn't the part of his game you worry about. I expect him to play much more however given the fact that the Broncos will run the ball extensively from their 3 WR sets.

Substitute Logan Ryan for Dane Fletcher in these sets and Ryan will most likely cover Welker in the slot.

Rarely jumps into coverage (once last week against Colts). Will be a full time DT regardless of what front the Broncos show. On 470 pass rush snaps has 7 sacks and 14 hurries. On 362 running snaps has 24 stops. Overall grade of -28.5.

This matchup is highly favorable for the Broncos run or pass.

Will never drop in coverage. 2 sacks and 6 hurries on 112 pass rush snaps bode well for Zane Beadles and Manny Ramirez. Siliga has made his bones against the running game helping to plug the leak that was left when Joe Vellano took over for Vince Wilfork. Overall grade of 7.6.

Drops into coverage sparingly (2.7% of all snaps). This is going to be a tough matchup for Chris Clark at LT. On the season, Jones registered 13 sacks and 53 more pressures on 637 pass rush snaps. His productivity is a little bit low amongst the higher ranked pass rushing DE's, but his length and arms have Clark fits the last time around. Plays good against the run recording 50 stops on the season.

Orlando Franklin did a spectacular job the last time around keeping Nink from registering a sack. If there is one way to describe his play it's scrappy. He's not the strongest or most effective pass rusher, but his motor always gives him a shot at impacting the play. Will jump into pass coverage some, almost always in a zone or zone blitz concept. 9 sacks and 60 hurries makes him a formidable foe on the outside. Also very good against the run with 48 stops.

I don't want to see Julius blocking him one on one. That would be a recipe for disaster. Against Franklin however, Nink has his work cut out for him.

Hightower doesn't rush the passer all that often but when he does, it's usually on a designed blitz. In limited opportunities, he has recorded 1 sack and 16 pressures. Though mostly thought of as a run stuffer, Hightowever has spent about half of his snaps in pass coverage. Again mostly zone coverage. My money is on Hightower to be one of the two linebackers the Pats use against 11 personnel when that extra nickel DB comes into the game. He's better than Dane Fletcher. If this is the case, he will mostly be worried about covering the backs out of the backfield.

In space against Moreno or Ball, I'll take Moreno or Ball any day of the week. In run support he's one of the best Pats defenders.

Very impressive looking rookie who I've enjoyed watching play to end the season. This is their version of Danny Trevathan, but a little bit more talented physically. Jamie Collins is not really a pass rusher though he will be brought on the blitz. Watching tape of him he's not especially great against the run right now. He has a hard time shedding blocks especially by OL that get to the 2nd level, and he tends to get lost in the scrum. His overall value though has to be in the passing game where he provides the Patriots with that player who can matchup against athletic TE's. He matched up man to man quite extensively against Coby Fleener and really did a nice job keeping Fleener from making an impact on that game. On the season he has 112 coverage snaps, has been targeted 29 times and has given up 18 receptions for 170 yards (90 YAC), with 1 TD, 1 INT, and 4 PD. His length and jumping ability give him an advantage, so Peyton will have to be careful about throwing over and around him.

Julius Thomas is miles better than Coby Fleener. His speed is impressive and more than that he knows how to use his body to shield defenders and gain leverage. This is the matchup I'll be watching. If Collins is able to neutralize Thomas, then the Pats can afford to double team two of our receivers with their safeties.

Advantage? Broncos by a hair

Not sure how much we'll see Dane. He is more of a base linebacker and would be a terrible matchup for the Patriots against the Broncos 11 personnel. He's made the most noise as a blitzer in limited snaps. Other than that chalk this up as a win for the Broncos if he is on the field.

Not going to splice up a lot of screen shots on how they might be used because it will be simple. Talib on Demaryius, Dennard on Decker, Ryan on Welker. As far as the safeties, when they play Cover 1, McCourty will be your centerfielder. When they want to bracket the TE or even cover the TE with a safety it will be Gregory. I really think with the emergence of Jamie Collins as a cover LB that the Patriots could afford to play a lot of Cover 2.

Against even splits that gives you a double team against your outside receivers (Thomas/Decker). However, the Broncos could combat this by

If the Broncos can run the ball effectively against a 6 man box, it will make NE cheat one of those safeties to the LOS in order to help out. This is something the Broncos must do and do effectively in order to keep the Pats from clamping down on their pass game.

When you stack receivers you make the secondary vulnerable through pick plays and also route combinations that will take advantage of their presnap alignments. Guys have to communicate much more and everyone must do their job correctly or else you get blown coverages and big plays. This is perhaps one of the most effective ways to stack the deck and get favorable matchups for your receivers. In fact, let's see how the Broncos have accomplished this in the past.

Very simply a 4x1 empty set. To begin the play it looked like the Texans were in Cover 2. When the Broncos went 4 wide to the left, there was no one on Jacob Tamme. The safety left his deep responsibility to cover Tamme making this Man Free coverage with a single high safety. Well guess what? Now you have Julius Thomas split to the right with one on one matchup against a guy with bad leverage to start off with. Recipe for disaster-TD Broncos!!! 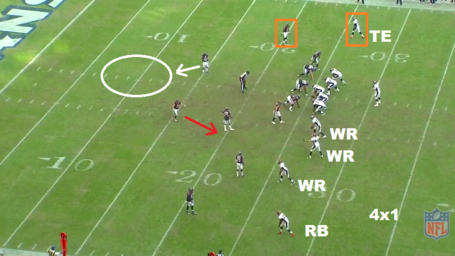 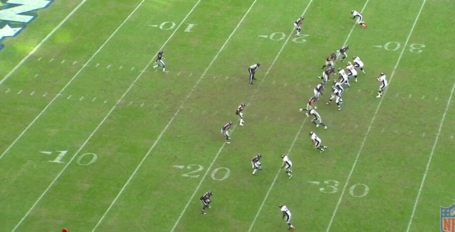 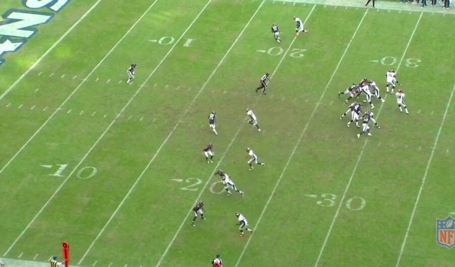 - Last time against the Broncos? Not targeted

- Last time against the Broncos? Did not play.

Thomas had the most success of any Broncos WR against press man and that is not saying much. Thomas does not burn. Once he gets into the open field he turns on the speed but it takes him longer to get from 0-60 than it would a TY Hilton. Talib usually struggles against speed. The recipe for tomorrow is to be physical.

Absolutely no excuse for the piss poor game Decker had last time. Guy is big and strong and must get off the jam at the LOS. I expect a bigger game from Decker tomorrow.

I want to see two of the most athletic players on their respective teams do battle, and I want to see if Collins can hang with a guy like Julius who uses his basketball training so well to gain leverage and position against his counterparts.

Welker had four catches for 40 yards last time out but was usually guarded with zone coverage coming over the middle. Welker is still the best slot receiver in the game and still has the ability to break ankles.

Peyton loves inside pressure because he can see it coming, and he can use those feet to shuffle to the side while the pocket is imploded. Jones caused a strip sack the last time that completely change the complexion of the game. Clark has to find a way to overcome that huge wingspan and strength advanage.

When the Broncos pass the ball: Advantage Broncos

Last meeting aside, this is the greatest offense and passing offense in the history of the NFL. Sure you can stifle it once, but can you do it again under completely different circumstances? The Patriots can only hope to contain. The magic number for them is 24 points. If they can keep the Broncos under 24 points they will have the inside track on Super Bowl XLVIII

When the Broncos run the ball: Advantage Broncos

I'm not sold on Sealver Siliga. This guy has bounced around team to team and has found a home due to injury volume. I don't see enough change and improvement here to say the Patriots can keep the Broncos from running the ball effectively on Sunday. Will Moreno have 200 yards again? Probably not. But there is no reason why the Broncos can't put up 120-140 between Moreno and Ball combined and still average at least 4 yards per carry.

Who makes it to Super Bowl XLVIII will be decided when Denver's offense is on the field. The Patriots must play the game of their life to advance and hope for some turnovers along the way. This happened the first time around in frigid conditions away. The Patriots will have no inherit advantage this time around. May the best unit, and may the best team win.