Each day this week I will be breaking down both the Seahawks and Broncos by their perspective units. In a game that very well could be decided in the trenches, I'll begin by taking a look at the Seahawks Offensive Line vs. the Broncos Defensive Line. 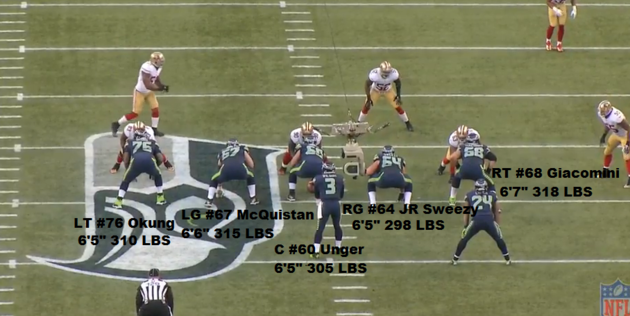 The interesting dynamic is the flux that seems to exist at LG. Both McQuistan and Carpenter have split snaps so to speak the last several weeks. Not sure what to expect but Terrence Knighton will have the upper hand either way.

For a team with a smashmouth reputation, there is something severely lacking along the Seattle offensive line. No one graded out positively from guard to guard, they struggled in the running game, and the left side of the line has struggled the most with the pass rush.

Here is a table (courtesy of Football Outsiders) showing the Seahawks (and Broncos) productivity in the run game using their advanced metrics: 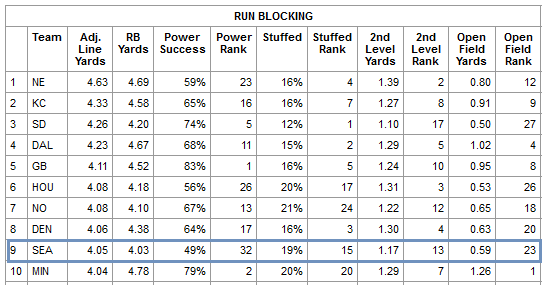 Ignore Adjusted Line Yards for now, and for that matter RB Yards. The three areas I want to focus on are 3rd and 4th/short (also goalline situations), yards in the 2nd level, and open field yards. Football Outsiders looks at those short yardage situations via their Power Success and Power Rank Metrics. in 2013 when facing 3rd/4th down and 2 to convert or a goal to go situation inside the 2 yardline, the Seahawks converted those situations 49% of the time which ranked dead last in the NFL.

Moving on to yards in the 2nd level of the defense (5-10 yards downfield), Seattle averaged 1.17 yards good enough for 13th place.

Finally, the Seahawks averaged 0.59 yards in the open field (10+ yards downfield) which was good enough for 23rd in the NFL.

These numbers tell me that Seattle struggled more than any other team in short yardage situations, were able to get to the 2nd level of the defense consistently, and rarely had running opportunities in the open field. This is a grind it out running game with the potential for long plays due to the tough running style of Marshawn Lynch.

Overall, I would not label the Seahawks rushing attack as a power attack and the physicality up front is not something the Broncos have yet to see this season. In fact I would call their tenacity and effort at the point of attack average.

Seattle ran the ball most effectively off Russell Okung and the LT spot. They struggled up the middle and off either guard, and were the most consistent to the right side of the field off tackle.

Seattle is middle of the pack with a Pass Blocking Efficiency of 77.0. They gave up 27 sacks, 21 Hits and 101 Hurries (149 Total Pressures) on 515 passing plays. This means they gave up some sort of pressure on 28.9% of all dropbacks. On average it takes Russell Wilson about 2.82 seconds from snap to attempt which ranks him 2nd worst amongst NFL Quarterbacks according to this metric. In comparison, Peyton Manning has the 3rd fastest average with 2.33 seconds from snap to attempt.

As shown above, the biggest problem area for the Hawks have been from LG. Those players are responsible for 12 sacks combined. Okung and Unger are solid, while the right side of the line has also given up significant pressure even if their sack totals are limited.

My film study this evening will take a look at each sack these players have given up and the circumstances behind them.

You'll see a lot of different configurations from the Broncos depending on offensive personnel and situation. Against heavy personnel (2 backs or 2 TE) you will see their base 4-3 or 4-3 under fronts. If you have not seen a lot of the Broncos this year, just know that they move guys inside and outside interchangeably. They have a lot of flexibility with their personnel and it is the biggest reason why they have been a productive group through all the injuries that have been suffered. 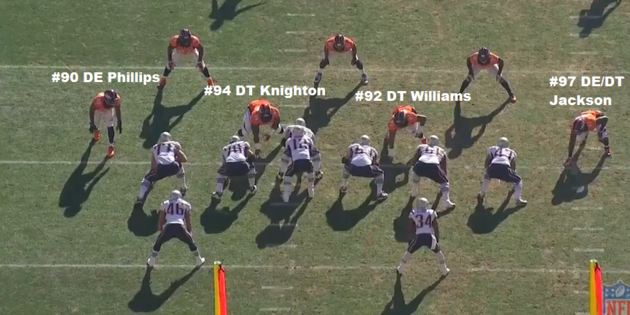 This is a look at their 4-3 base with a common stack by the linebackers behind them. When they look to play more of an undershifted line, the strongside end will move from a 9-tech to a 5-tech and will usually two-gap. This was the spot vacated by Derek Wolfe and is now primary played by Malik Jackson. When this happens, the SAM will come up to the LOS and show a 5-man line. The Broncos utilized the 5-2/Under look far more when Von Miller was in the lineup. 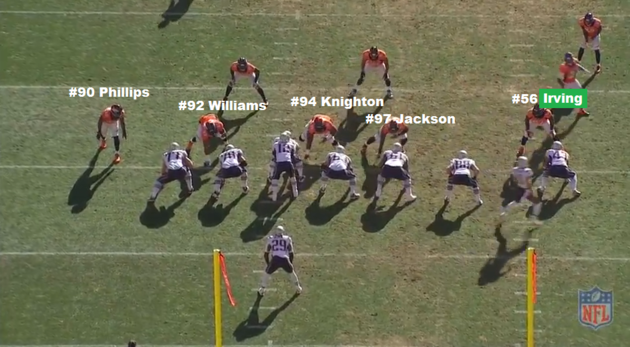 When shifting to passing downs and lighter personnel (3 WR), the Broncos will move to nickel and play a four man configuration similar to this:

Phillips, Jackson, Ayers, and Mincey are all capable of rushing from the end. From those players, Mincey, Ayers, and Jackson have been used to rush from the DT spot. Very fluid situation depending on what they want. I've heard the Seattle line labeled "Nascar" when all the pass rushers are in the game. Well the Broncos version of that would be Phillips and Ayers at end with two of Mincey, Jackson, and Knighton from the inside.

Finally, in long yardage situations, you will see a 3-man line when the Broncos utilize 6 or 7 defensive backs. 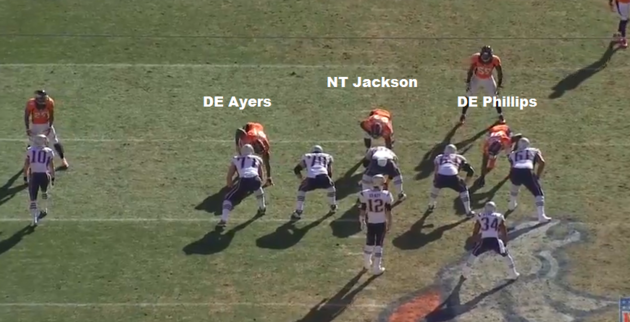 I did not list Wolfe or Vickerson here because they are on IR. However, taking their contributions into account, 73% of the Broncos 45 team sacks this year came from the defensive line. Everyone stepped up in the absence of Von Miller.

Nearly everyone graded out positively against the run with Terrence Knighton and Robert Ayers scoring the high marks in this category. As far as pass rushing, Knighton and Jackson are the only Broncos that made it to double figures.

The Broncos like to keep a rotation going especially on the inside which is why you see less of a discrepancy between starters and role players when it comes to snap count.

We know on base downs Knighton will be controlling the middle as a 1 tech. On passing downs, he will move to the 3-tech against one of the Seattle guards. There is no reason why he shouldn't get some pressure especially if he continues to play the way he has.

The Broncos are very good at stopping opposing running backs for no gain or a loss. They are also very good at the yardage they allow on the 2nd level of the defense. Though not bad in short yardage situations, they start to fall to the middle of the pack.

Since the Broncos were gauged for 177 yards on the ground in week 15, they have allowed the opposing team to rush for 87, 64, 65, and 64 yards respectively the past four games.

This is a definite strength for the Broncos defense heading into the game.

You have interpret this backwards. In other words, when looking at the numbers for "left end" that is from the offenses' point of view. So those numbers would actually be talking about the RDE position. Now that we know this information, we can see that the Broncos excelled in the middle and off LDE (usually Shaun Phillips). Where they struggled was off both ends. What I have noticed on these plays is good seal on the playside end with a good 2nd-tier or pull block on the playside linebacker. Bad angles and missed tackles are also to blame for the inflated numbers.

If you're Seattle, plan on getting Marshawn Lynch the ball on some stretch plays to the outside. In fact a creative use for Percy Harvin would be to utilize his speed on an end around. If Seattle is aiming to be successful, jamming the ball up the middle seems like the worst way to go.

Russell Wilson is exactly the prototype of Quarterback that will give the Broncos issues. He can escape the rush and buy some time. Unlike some of the other athletic quarterbacks the Broncos have faced, he has a tendency to keep his eyes downfield even while scrambling.

Against someone like Wilson you want to disrupt and contain at the same time. If pressure gets there, you want it to be with your front. You want to avoid blitzing too much as it leaves potential holes to run through with one less defender back. Wilson's passer rating drops by almost 50 points when pressured, compared to only 17 points when blitzed.

Best case scenario, the Broncos muddle rush or play contain with their ends, spy Wilson with one of their LB's (preferrably Danny Trevathan or Wesley Woodyard), and get some pressure from the middle with their tackles. When I get to Wilson later on in the week, you will see what has and has not worked against him.

When the Seahawks Run the Ball: Advantage Broncos D-Line

The Broncos Defensive Front certainly have played like the more physical unit as of late. Their season averages across the board are better than those from the Seattle Offensive Line. Not only that, this team has made it's playoff bones on forcing uncomfortable 3rd downs for the opposing offense by winning the battle in the running game on 1st and 2nd down. If the Broncos are careful to wrap up and use sound fundamentals when tackling, the 2nd and 3rd efforts created by Marshawn Lynch's hard running style will be minimized.

When the Broncos Rush the Passer: Advantage Even

Yes the Broncos can cause pressure. Can they do so consistently? No. There have been stretches of game against the Chargers and Patriots in the playoffs where the opposing quarterback has far too much time to throw the ball. The key for the Broncos is to get those pressures and sacks in key situations, like 3rd and 9 to force a field goal. Or 4th and 2 to force a turnover on downs.

When the Seahawks Run the Ball: Matchup to Watch

If Denver is susceptible on the edge, the biggest matchups will be against Phillips and Jackson, and perhaps even Danny Trevathan from the defensive backfield. It will be interesting to see if Seattle can get some athletic blocks on the 2nd level to try and spring Lynch on a good run.

When the Seahawks Pass the Ball: Matchup to Watch

McQuistan and Carpenter have giant targets painted on them already. Looking forward to their matchup with Terrence Knighton. They should also be susceptible to some stunting action.

Later on today, I will preview the Seahawks Defensive Line against the Broncos Offensive Line.