Hello folks, with all these new toys to play with, it is high time Bronco Mike gets off the bench and brings you some scouting reports. I'm going to start off by looking at DeMarcus Ware.

Was a bit of a down year statistically. Ware registered only 6 sacks after having registered 31 the previous two seasons combined. Despite losing a couple games to a thigh injury, Ware still graded out +12.6 according to PFF. In fact his consistent play earned Ware positive grades across each category.

For those worried about Ware and the nagging injuruies that defined his 2013 season, those were the first games he missed due to injury in his entire career. He is a workhorse capable of shouldering a full-time load.

When I go back and watch his tape I see a complete player. One who can set the edge and disrupt the running game, one with a killer first-step off the snap, and one who uses his experience to snuff out plays and chase the quarterback. In the pass rush, that killer first step is paramount in generating a burst that successful defeats his opponents. Most intriguing about his rushing abilities are the plethora of moves he has at his disposal.

Ware is very similar to Von Miller in stature and ability. When you watch him play (even last season) his athleticism sticks out. Though he only registered 6 sacks, each one taught me something about what he will bring to the table in 2014.

Back when Von Miller was coming back from suspension, I wrote an article cataloging his time from snap to contact on each sack. I came to the conclusion that on average it takes Von Miller about 2.75 seconds to get to the quarterback. Though this is a considerably smaller sample size, I did the same thing with DeMarcus Ware. Here are the results:

His slowest sack on the season was against Chicago when he faked to the inside only to use a speed rush back to the outside. He still managed to clock in under 3 seconds which is the benchmark. On two occasions the line completely screwed up their blocking assignments leading to an easy sack (1,4).

Sack #5 was an absolute thing of beauty as he set up his man with a stutter step to the outside before spinning back to the inside.

Something I want people to be aware of is just how violent and active Ware is with his hands. When coupled with that elite athleticism it is a recipe for domination as we will see on this play.

Ware will push around the edge just like he would on a speed rush to the outside. After a momentary hesitation, he gets hand placement on the offensive player and gets him moving back towards the goalline. You can see the lineman's feet planted and his momentum clearly going north and south. Once Ware has him on his back foot, he resets his base and violently punches and shoves east to west. 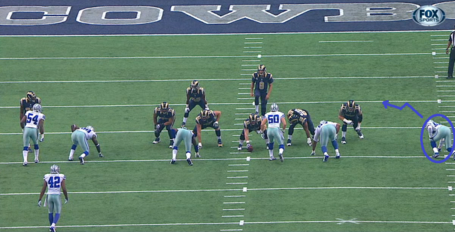 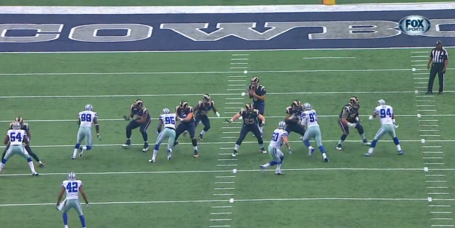 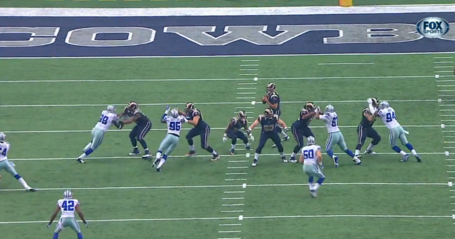 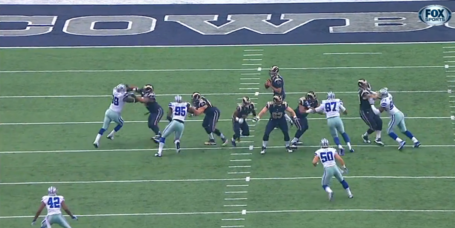 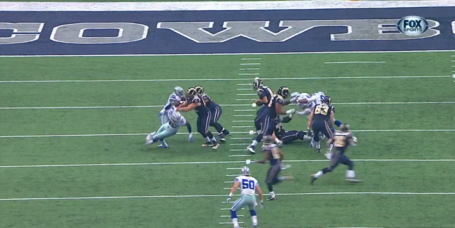 He used the larger lineman's momentum against him and gets him on the ground before taking down Sam Bradford.

Elite rushers may not be the largest or strongest people on the field but they are adept at using momentum and leverage to gain the advantage. This is similar to a Von Miller bull-rush where he gets the lineman to kick far outside before changing directions on a dime to get that momentum going straight into a player who is now on skates.

No.
I've watched Ware rush in a 3-4 from a two point stance, I've watched him rush in a 4-3 from a three point stance. Doesn't matter. That explosive first step is there regardless.
Last season we knew if Robert Ayers was in the game, most of the time he would have his hand in the dirt. If Shaun Phillips was in the game, could be standing up, could be in the dirt. It will be the same thing this year with Ware. Sometimes he'll be up, sometimes down, but his experience playing both will continue to give Jack Del Rio quite a bit of flexibility if he wants to mix up his fronts.
He can also be dropped into coverage, but even when he was asked to do that more in the 3-4 he still only dropped about 10% of the time.

Broncos fans should be thrilled at the prospect of Ware and Miller on the field together. Both possess elite skill sets and will be hard to account for. Ware is a definite upgrade of former edge rusher Elvis Dumervil and will give the Broncos something they lacked last season.

Though injuries are always a question, I'm not worried about them with Ware. Until last season he had not missed a game in his entire career.

Next up I'll take a look at Emmanuel Sanders.