Here's a detailed look at the Kansas City Chiefs and what you could expect on Sunday.

This past offseason marked a lot of turnover in the Chiefs offensive line.  T Branden Albert and G Geoff Schwartz and Jon Asamoah are all gone.  G Mike McGlynn comes over from the Colts where he was a 14-game starter a year ago. At the other guard spot is 6th round rookie Zach Fulton.  Third year player Jeff Allen rounds out the patchwork offensive line at right tackle. There is some concern that Allen might not play due to an elbow injury sustained in week 1. In that case former Broncos tackle Ryan Harris would get the start.

Back from suspension is Dwayne Bowe who brings much needed physicality to the WR position.  Opposite of Bowe you'll see Donnie Avery who was targeted 12 times and caught 7 balls for 84 yards against the Titans.  When the Chiefs line up in 11 personnel, you'll probably see Avery kick inside with Bowe and Junior Hemingway on the outside. Against the Titans and a depleted WR corps, Hemingway saw 33 snaps from the slot.

There is one unmistakable best all-around player on the Chiefs offense, and he received a total of 11 touches on Sunday. Why Andy Reid would fail to get the ball to Jamaal Charles is beyond me. There is certainly no excuse for neglecting the most dynamic player on your team. The Broncos should expect to see a healthy diet of Charles this Sunday on the ground and through the passing game. Kansas City normally employs a fullback in their schemes but they only ran about 9 plays out of 21 or 20 personnel last week.

The trigger man is none other than the 17 million dollar man himself, Alex Smith. Smith had a terrible game against the Titans   He completed just 54% of his passes while throwing 3 interceptions.  Something that has always bothered me about Smith--and this very well could be group think or conjecture, but if you get him behind a score or two, he just doesn't have the patience to chip away at the lead. He forced a lot of bad throws into coverage. Just something to be aware of.

Week 1 saw a mixed bag of results.  But at each important turn of the game it seemed as if someone stepped up and made a play. It was Aqib Talib tipping a ball to Rahim Moore on 3rd down, Bradley Roby sticking Hakeem Nicks at the goalline while Quinton Carter played mop-up duty. Two goalline stops, and a game-saving deflection. The coverage issues that plagued the Broncos existed in the design. They played a ton of Cover 3 with zone underneath from their linebackers. At times the checkdowns and short throws had a lot of room to run and get YAC. Luck rarely beat the secondary when throwing downfield.

The running defense did not see a ton of action due to an early lead. Trent Richardson ran hard and gained some yardage after contact--something that hasn't been true in the past. Charles is a much better and shiftier runner. This should be a better test for a unit that finished 2013 strong.

If I could describe the defense using one word, it's flexibility.

Need to see more: Von Miller.  Miller dropped into coverage 13 times and graded out positively according to PFF. The explosiveness in his pass rush wasn't quite there though.

Intrigued by the possibilities: Quinton Carter. Carter is quickly becoming a 2nd matchup safety the Broncos can utilize in coverage.

When the Chiefs have the ball

You can see they ran a lot of plays out of their 3WR set. Remember though, they were also behind most of the game. I'm not sure about the fullback, but the Chiefs have a potentially good receiving threat in Travis Kelce and they need to get him involved in the game more.  I would expect to see a majority of 12 and 11 personnel this Sunday with the other looks sprinkled in for variety. 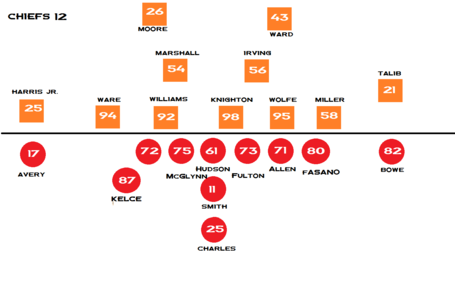 You will see a number of approaches to this defense.  On the outside you can expect Talib on Bowe and Chris Harris Jr. on Avery. Those matchups seem perfect. With our under defense you will see some bracket action from Von Miller and TJ Ward on the strongside TE. Expect Ward to creep into the box quite a bit. On the other side Brandon Marshall will be responsible for coverage--in this case against Kelce.  What the Broncos need to be careful of is vacating the flat areas with their OLB's and leaving them wide open for Charles.  Del Rio had a number of approaches to combat the TE tandem Indy brought to town.  Something to keep your eye out for is Quinton Carter.  Multiple times I saw him in the role TJ Ward plays as the coverage MLB in nickel personnel. What you're getting here is the Broncos utilizing two safeties to play match-up on the opposing tight ends. 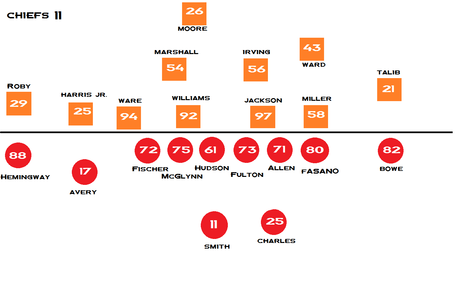 I would suspect the Chiefs have more confidence leaving Anthony Fasano on the field on in pass-rushing situations, but they certainly could look to put their best 5-pass catchers on the field with Kelce getting the nod.  Regardless, something I saw a lot from the Broncos last game was Cover 3. Similar in the mold of Seattle. They had a lot of success covering folks on the outside and it simplified Rahim Moore's job quite a bit. Basically he's your centerfielder now. He has the ability to read just a couple of routes and react to the action. You will almost certainly see TJ Ward cover the TE one on one and Brandon Marshall will be tasked with keeping a lid on Jamaal Charles.  One big change you see---and you have to remember the Broncos have several different approaches to their nickel package, is that they have no problem leaving Nate Irving on the field to cover. From what I've seen thus far, he's done just fine. Another option is to yank Irving for TJ Ward and replace Ward with Quinton Carter.  In fact, against the speed of Jamaal Charles, that gives you sideline to sideline coverage from Marshall and Ward, and still gives you a capable hand on the TE with Quinton Carter.

Terrance Knighton and Sylvester Williams vs. the patchwork interior

It's all about protection:

TJ Ward was targeted 8 times and gave up 5 receptions for 24 yards with 1 PD.

Aqib Talib was targeted 10 times and allowed 5 catches for 70 yards He also had 2 PD.

Brandon Marshall was targeted 10 times and allowed 8 receptions for 75 yards. Colts were able to get him against Wayne, Hilton, and Nicks 1x

Bradley Roby was targeted 11 times and gave up 8 receptions for 98 yards. Had most success against Reggie Wayne, 2 PD.

Outside of Julius Thomas, the offense sputtered last week. Weird to think that a unit that put up 31 points "sputtered" right? Manning overthrew several receivers and was off with his accuracy all night. Demaryius Thomas never quite found his groove and dropped a couple of passes that he would normally bring in. The running game struggled to gain consistent yardage and the re-shifted offensive line had troubles keeping defenders out of the running lanes.

With all the speculation about who would replace Wes Welker, the Broncos chose to run more 2-TE sets. When they ran 11 personnel, Emmanuel Sanders played the slot while Demaryius Thomas and Andre Caldwell played outside.

For a team that showed a lot of promise last season, they have suffered a lot of setbacks. In the offseason John Dorsey saw fit to release pro bowl corner Brandon Flowers. Then matchup player Sanders Commings went out with a broken ankle. Joe Mays should return midseason sometime, but the defense was dealt another blow with the season-ending injuries to Derrick Johnson and Mike DeVito. Johnson is one of the best ILB in the game and will be a huge loss for the team going forward. DeVito was primarily a base DE but had recently earned more playing time as a DT in their nickel package.

The Chiefs nickel line still projects to be a tough matchup in pass protection.  On base downs, the Chiefs better hope newly signed Kevin Vickerson can two-gap a bit because keeping those linebackers free will be the key to their success in the middle of the field.

Overall, the Chiefs look to be weak in the secondary, and in the middle of the field. Denver should test Poe early to see if he's capable of holding the fort in the middle when Montee Ball gets carries.

When the Broncos have the ball 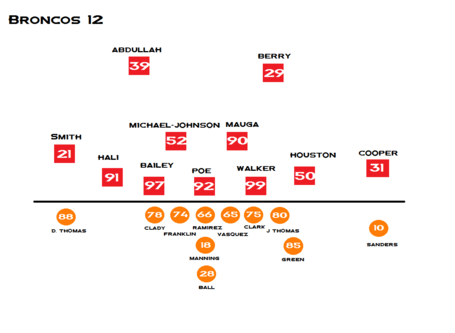 Other than the fact that the Chiefs defense looks bigger...and much like a giant smiley face in this graphic, you can see that their base defense can be quite vulnerable to our 2-TE sets. We move our receivers around, but remember that Marcus Cooper was absolutely obliterated by Peyton Manning and Eric Decker in their 2nd meeting last season. Michael-Johnson was targeted once and allowed a reception for 13 yards. Josh Mauga was also targeted once and allowed a reception for 11 yards. Both of these players are relative unknowns. ILB Jerry Franklin was called up from the practice squad this week. 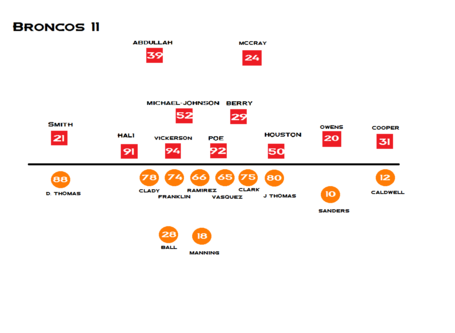 I would imagine you will see former Bronco Kevin Vickerson play as a DT on passing downs quite a bit. As far as Eric Berry as a coverage linebacker? He's done it before, with Derrick Johnson out, it is nice to have some experience in this role. Then again, they can always play press man with our WR's and bracket Julius with a LB/S. Chris Owens was their slot corner last week, I have no idea if the return of Marcus Cooper changes their pecking order.

It's all about protection:

The Broncos did not face a tough edge rush last week like they will this week. Manning faced minimal pressure and was brought down when a blitz flushed him to the edge.  Houston registered two sacks and four pressures last week.

- Sean Smith was targeted 7 times and allowed 5 receptions for 52 yards and 2 touchdowns.

- Eric Berry was targeted once and allowed a reception for 19 yards.

- Ron Parker was targeted 9 times and allowed 5 receptions for 63 yards.

When the Chiefs pass the ball: Advantage Broncos

Alex Smith is not Andrew Luck, and our secondary is way too good to allow another 300-yard performance from this offense.

When the Chiefs run the ball: Advantage Chiefs

When the Broncos pass the ball: Advantage Broncos

The Chiefs took a step back this past offseason and have become weaker due to injury. This game looks like another potential big one for TE Julius Thomas especially with so much inexperience in the middle. The Chiefs edge rush will have to make some big plays to hold the high-powered offense down.

When the Broncos run the ball: Advantage Broncos

That's how much the loss of Derrick Johnson hurts. Normally the Chiefs should do fine against the porous Broncos running game. I would look for Denver to attack Poe and the middle of that line right away. Also look for more stretch runs to test the range of these inside backer.

I expect a dominant performance by both the offense and the defense. In order for Kansas City to make a game of this, they must play ball control offense and create some turnovers on defense. In the end, I think their secondary is too weak to overcome the weapons at Peyton Manning's disposal.