The Parents' Guide to Raising a Denver Broncos Fan

So you've had a baby. There's a great many choices that lie ahead for them. Which college to go to, what deity to worship, what kind of life they want to lead. While all of these issues merit careful thought, they pale in comparison to what's of the highest importance - what NFL team will they root for?

Share All sharing options for: The Parents' Guide to Raising a Denver Broncos Fan 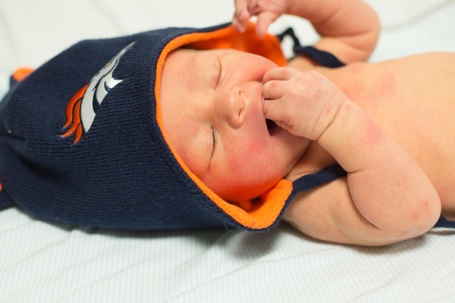 While I am sure there are the crunchy granolas among us who want their kid to "find their own path" with regard to rooting for an NFL team, most of us want our children to follow in our footsteps. Most of us want our kids to be Broncos fans.

So, how do we turn that gurgling blob of newly born human into a passionate and informed Broncos fan?

Every Broncos fan needs a little swag to wear on gameday. From bibs to socks to infant hats, the NFL has you covered. Make sure to buy duplicates of everything. The last thing you want is your kid to blow out his Broncos onesie in the second quarter while the Broncos are driving (superstitious Broncos fans will know what I'm talking about). You don't want to be responsible for a Broncos loss because your kid broke "mojo" when you changed him into a "Mommy's little slugger" t-shirt. We will all know it's your fault.

Then there's the issue of your swag. In the early years, don't get too hung up on wearing your stitched/autographed Terrell Davis jersey on gameday. Kids vomit. Diaper changes can spiral out of control. Keep it simple and know that you'll soon have new stains to accompany the spilled bloody marys and wing sauce that give your gameday clothes their character. Also, don't be afraid to take those items to the dry cleaner. Some stains are worth forgetting.

Part of being a fan is the fanaticism. It's important that you engage the young-un in conversations about the Broncos. "How many touchdowns is Peyton Freaking Manning going to throw for against the Ravens? Nine or more than nine?"

Your three week-old will probably not answer back, but one day they will. Just keep at it.

When I asked MHR's own Big Pete what he has done to ensure his twin daughters grow up Broncos fans, he imparted this sage piece of wisdom.

"With little little kids, like, so young there's no way they will be able to know wtf is going on in football games, the biggest thing is to just be overly excited when they say things like "Go Broncos" or "Elway is the Champion" or whatever Bronco related stuff they say. The more excited you are towards them, the more they are excited and the more they will do it."

So, even when the Redskins score a touchdown against us and your confused kid squeals "Go Broncos" in delight, give them a Mile High Salute back. They will eventually figure out when it's appropriate.

When you're slumped down in the couch with your chin on your chest degrading the offensive coordinator's mother, don't worry about what your kid will think. Swearing, cursing, and yelling are part of the football experience. It's through these episodes that your kids will learn when it's appropriate to cheer or jeer. Football games are a manic experience with the highest of highs and the lowest of lows. Don't be afraid to let your passion show. Just don't turn your passion on (threaten) the kids. That's how Raiders fans are born.

Back in the early 1990's when someone like "Butterfingers" Glyn Milburn would fumble the ball, my own saint-of-a-mother would unleash a torrent of swear words the likes of which I had never heard. I turned out just fine. For the most part.

No matter how late the games go, your Broncos fan kids can always stay up late to watch. Things that they ordinarily aren't allowed to eat or drink should be offered during the games to make them even more special...within reason. Allowing your six year old to slurp down their eighth coke of the half may be a bit overboard. Use your judgement. Good snacks and no threat of bedtimes are a great time made for a little kid.

Take your kid outside to throw the football at halftime. Get that circulation going. Wear them out a bit and you'll have less work to do to keep them interested in the second half.

One of the greatest feelings in the world is seeing your kids embrace the team that you love so dearly. Follow these simple guidelines and you'll surely be watching games with them from your easy chair at the old folks home they locked you up in.

Got any other tips to share with Broncos fans? Photos of your kids enjoying the Broncos? Post them here!